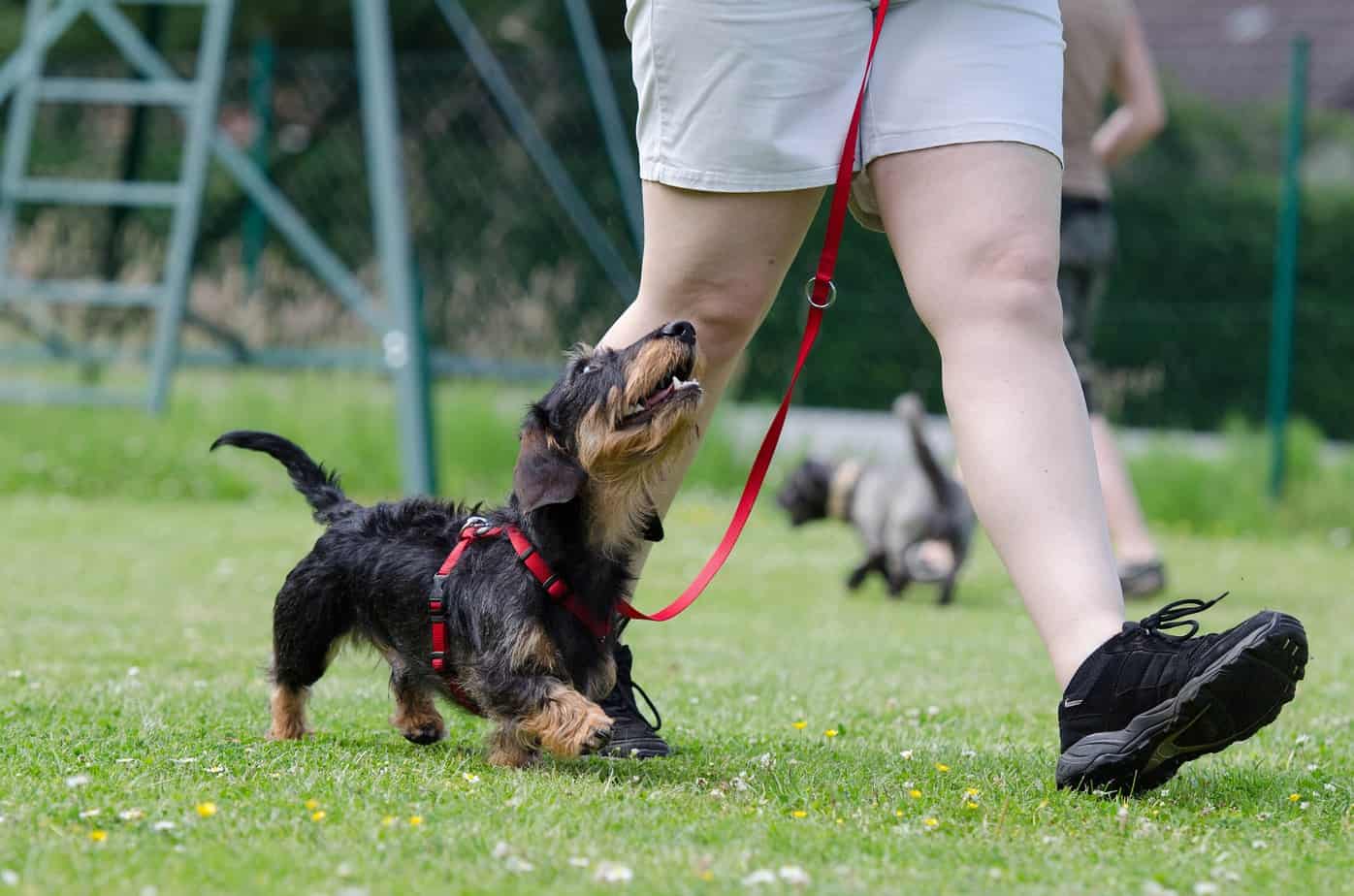 Dachshunds are a popular breed due to their intelligence and personality and the deep bonds they develop with their owners. Unfortunately, their genetic design for hunting leaves the beloved Dachsie susceptible to several genetic weaknesses, the most common of which is Interverterable Disc Disease (IVDD.) Consequently, owners are often concerned about their dachshunds sustaining an injury while running.

Dachshunds may go on runs as they were bred to hunt and are a working breed. Their physiology (short legs) dictates that they reach high speeds only in short bursts, so it is doubtful whether your Dachshund will be an ideal running companion. Ultimately it depends on your dog, their spine health, condition, and fitness level.

There is so much conflicting information regarding what dachshunds should or should not do, and it is easy to become confused. Therefore, we have consulted published medical journals to provide you with scientific information behind IVDD and your Dachshund’s exercise needs.

Why Are Dachshunds Prone to Spinal Problems?

Dachshunds fall under the category of a chondrodystrophic breed of dog, which are the breeds with short legs and longer bodies. This genetic trait predisposes the breed to premature degeneration, calcification, and herniation of the intervertebral discs.

Chondrodysplasia (CDPA ) describes a genetic skeletal trait that affects the growth of cartilage plates. Chondrodystrophy is characterized by short limbs, and a predisposition to intervertebral disc disease (IVDD) is common in the Dachshund breed.

IVDD is a particular problem in the Dachshund breed, and between 19-24% of Dachshunds show symptoms of IVDD during their lifespan. Because of this genetic predisposition, there have been many concerns about what types of physical activity might lead to the manifestation of IVDD. Even top websites are rife with misinformation regarding dachshunds and physical activity.

How Does Exercise Affect Your Dachshund?

There are some interesting findings in a publication in Canine Medicine and Genetics, an article named “DachsLife 2015: an investigation of lifestyle associations with the risk of intervertebral disc disease in Dachshunds.” With data analyzed from 2,031 dachshunds, the study linked to exercise and the prevalence of IVDD in Dachshunds.

The study found that exercise of over 1 hour a day, including moderate stair climbing and jumping on and off furniture, reduced the prevalence of IVDD considerably.

They also found a higher incidence of IVDD in Dachshunds with less than 30 mins exercise a day who were prevented from stair climbing and moderate jumping actions.

There is no evidence that Dachshunds that are prevented from running or jumping actions reduced their chances of IVDD. In fact, Dachshunds with less than 30 minutes of exercise a day and are kept from jumping or running exhibit a higher tendency towards IVDD.

The results reflect that dogs with a higher level of exercise and range of movements result in increased musculature that supports the spine and reduces the risks of herniation or disc protrusion.

It is presumed that increased activity improves nutrition in the spinal discs and lowers the effects of mineralization.

Giving your Dachsie more chances to exercise will also make them less likely to dig holes where they’re not supposed to like I wrote more about in an article on this website.

How Much Running Should I allow My Adult or Puppy Dachshund?

It is essential to be clear that defined exercise duration and intensities are dependent on your individual Dachshund. Age, weight, fitness levels, and your dachshund’s spinal health are all factors that must be considered when exercising your dog.

Dachshunds who already exhibit IVDD should be exercised in particular moderation and with extreme care.

Healthy and active dachshunds have different exercise needs according to their age. Dachshund puppies need special care with exercise to ensure that their growth is not hindered. You should follow the following guidelines when exercising your Dachshund puppy or adult.

A general rule of thumb is to exercise your Dachshund puppy for 5 minutes per day for every month of their age. For example, you should exercise a 3-month-old pup for 15 minutes every day.

Your yard or garden should be ample space for a pup to exercise or any safely enclosed open area. You should also only consider walks outside once their vaccinations are completed, and they reach the age of between 4-6 months.

Too much rigorous exercise for a Dachshund pup before their bones have properly developed may cause developmental and growth issues. Aim to slowly build up your walks over time until your pup’s growth plates have closed, and they can move on to adult exercise.

Once they have developed their bones and growth plates properly, you can start exercising your dachshund properly. Dachshunds need at least an hour of exercise daily for optimum health and prevent the chances of IVDD.

For standard Dachshunds, you may break the hour walk into a 25-minute walk twice a day and some extra time for play. Exercise such as running prevents this intelligent breed from growing bored and indulging in barking or digging behaviors.

Is Running Bad for Dachshunds?

Running is good for healthy and fit Dachshunds who have built up their endurance slowly over time. Originally bred to hunt, they love nothing better than a run, with their airplane-wing ears flapping. They are, however, suited better to short, intense bursts of speed rather than long runs.

Because they have short legs, they are not suited for the long-distance running of the bigger breed dogs and should have frequent rests.

If you allow your Dachshund off the leash, ensure that they are properly trained for recall, or you might find them taking after squirrels at high speeds!

If you are seeking a long-distance running companion, dachshunds are not your ideal choice. With their shortened legs and tendency to overheat, Dachshund’s fare much better with short runs interspersed with rest.

Ensure your Dachshund always has access to fresh water if they have been running to keep them hydrated.

Despite the plethora of warnings to the contrary, keeping your dachshund from free movement, moderate stairs, and all jumping may be detrimental rather than beneficial for your Dachshund’s health.

Maintain a balanced weight and give your Dachshund plenty of exercise, and you may help prevent IVDD.  Allow your Dachshund to run freely if the area is safely enclosed, and they will let you know when they are tired. With the proper exercise, you will find you will have a much happier companion.