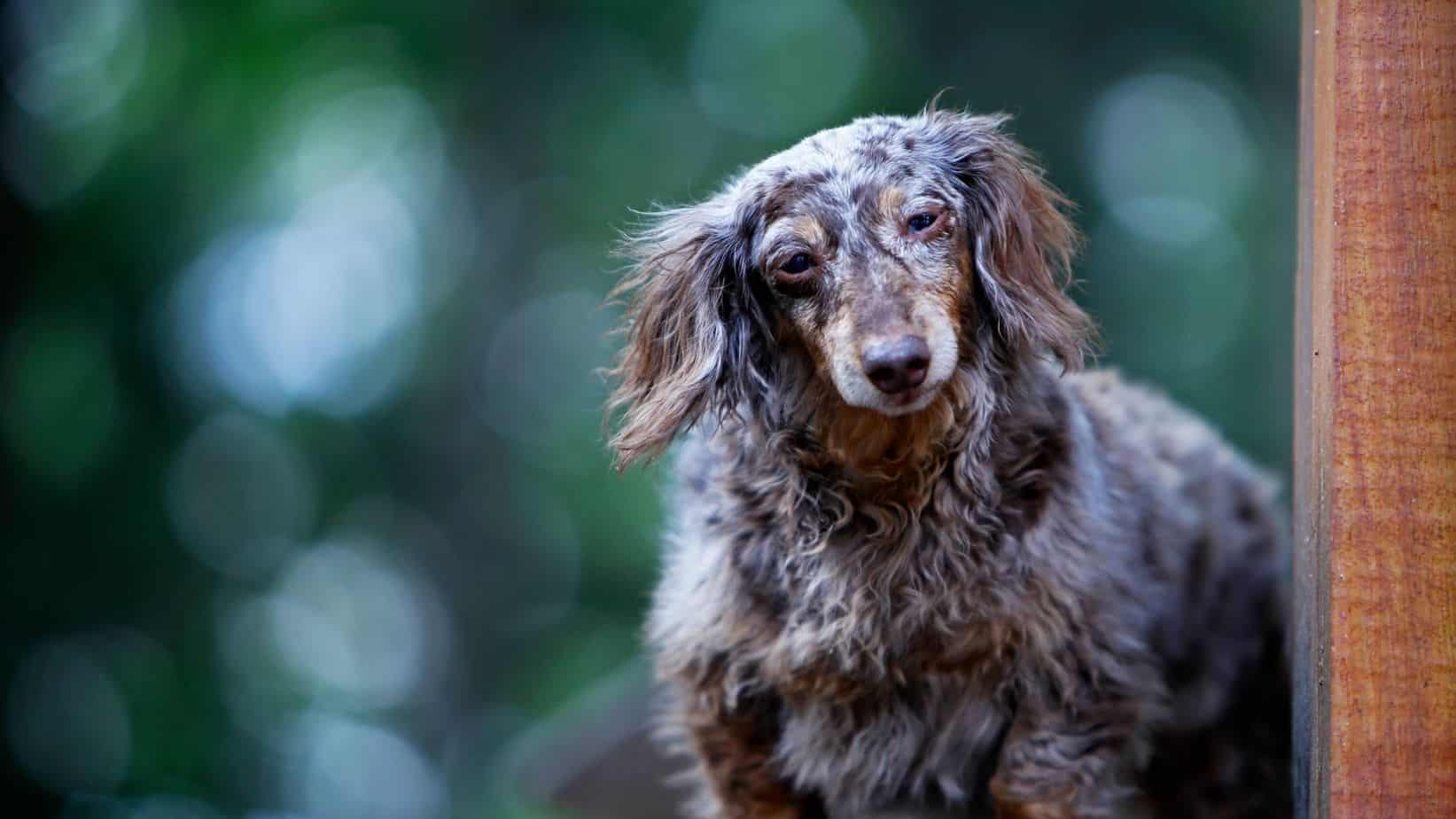 As more and more breeders turn to ‘exotic’ breed variations to increase their prices, many unscrupulous breeders are willing to compromise their puppies’ health to make money. Although the blue-eyed dachshund (Double Dapple) is arguably the most beautiful of dogs, the genetic risks far outweigh their aesthetic benefits.

A Dachshund can have blue eyes if they have the merle or dappled gene, particularly if they result from the mating of two dappled parents (Double Dapple.) Less commonly, Dachshunds with albinism may also exhibit blue eyes, but both the Double Dapple and the albino genes have associated risks such as blindness and deafness.

The Double Dapple gene, most commonly responsible for partial or wholly blue eyes, comes with many potential disabilities. If you plan to buy a Dachshund, it is essential to know those specific characteristics that may lure you into a purchase may also condemn your pup to a cruel existence!

How Does a Dachshund Get Blue Eyes?

The most common cause of blue eyes in a Dachshund is the dapple or merle gene. The only other way that a purebred Dachshund may have blue eyes is to suffer from canine albinism.

The Dapple or Merle Gene

The dapple or merle gene is a genetic pattern on an existing coat color rather than the coat color itself. The merle gene is not limited to dachshunds but can be found in breeds such as the Harlequin Great Dane, Collies, and the Australian Shepard.

The merle gene is classed as an incompletely dominant gene that causes random splotches of dark pigment overlaid with a lighter shade of the same color. The pattern occurs when a dog has a single copy of the M allele. All merle types have the Mm genotype, which means they have one allele for merle one for non-merle (Mm).

When a merle (Mm) Dachshund breeds with a non-merle (mm) one, the litter will average half merle puppies and half non-merles. The merle gene may alter the dark pigment in the eyes and may change dark eyes to blue or part of the eye.

However, due to the merle or dappled gene’s sporadic patterning, a merle dachshund may have dark eyes, blue eyes, or even odd eye colors.

More rarely, you might find a dachshund that is suffering from albinism. Although one type of albinism associated with rodents and rabbits’ results in pink eyes, the albino dog will typically have blue eyes.

The difference between a white dog and an albino dog is found on the skin surrounding their eyes and their nose’s color. Albino dogs typically have no pigmentation around their eyes and have pink noses.

Albino Dachshunds also have a genetic tendency towards deafness and blindness and increased risks of skin cancer.

Are Blue Eyes Bad For a Dachshund?

Often blue eyes in Dachshunds are produced from the double merle combination called Double Dapple, which, although beautiful, has awful implications for a Dachshund’s health.

When two dapples markings are superimposed on one another, there is a greater prevalence of white patching, which can cause other related issues like I’ve talked about in this other article.

The risks of breeding these double merle pups have received increasing attention and in 2013, the UK Kennel Club stopped registering puppies born from merle on merle matings although Double Dapple Dachshunds are still allowed on their registry.

The AKC has yet to take Double Dapples off their registry, although they have come under increasing pressure by the public to do so. Double dapples are the result of breeding two Dapples together. If a dachshund has MM genes, there are a host of related health issues such as:

Double merles or Double Dapple, Dachshunds are prone to microphthalmia in which the eyes are abnormally small and sometimes only partially formed.

In some cases, the eye is so small that a third eyelid permanently occludes their vision or creates a pupil that is not circular but has a starburst shape.

The prevalence of deafness associated with the double merle gene was as high as 4.6% for both single ears and both ears simultaneously. This percentage is almost double the risk of deafness in single merle breeds.

The double merle gene has been linked to the increased chances of partial or total blindness in the Double Dapple Dachshund gene.

How Can I Tell If My Dachshund Is Double Dapple?

Unfortunately, it is not always easy to tell by eye whether a dachshund is a dapple or not. The most common characteristics to look out for are white markings on areas similar to a collie, such as a neck, paws, nose, and tip of the tail. A Double Dapple will have blue eyes, partially blue eyes, or one blue and one dark eye.

However, certain coat types are difficult to tell the dapple gene from, particularly the cream/red. The cream/tan/red pigment Phaeomelanin does not express the dapple phenotype in heterozygous form.

Some dapples also tend to fade as the puppy grows and may cause an accidental Double Dapple pairing.

Dapple dachshund pups should never be bred with tan/cream/red-pigmented partners unless the dog has been tested for the dapple gene.

You may approach your qualified local veterinarian for advice on the merle gene testing procedures.

Are All Double Dapples Affected By Poor Health?

Some Dapple dachshund breeders take great care to ensure that their breeding lines are free from disease and congenital ailments linked with the merle gene. However, unscrupulous breeders often ‘eliminate’ diseased pups before selling to maintain their ‘clean’ record.

Blue-eyed merle pups are often more costly than their single-dappled siblings due to their exotic status and lack of buyer awareness. The incidence of Double Dapple blue-eyed dachshunds has been high enough that the Dachshund Breed Council has stipulated clearly that two dapple Dachshunds should not be interbred.

It is cruel to allow an animal to suffer potential ill-health merely to display an unusual or distinctive trait such as the double Dapple Dachshund. No aesthetic feature should take precedence over potential health hazards.

There can be no doubt that blue-eyed dachshunds are exquisite, but supporting the breeding of these Double Dapple puppies is taking unnecessary risks with the health of your puppy.

As awareness increases, more and more kennel clubs and animal health organizations will move to prevent this practice.