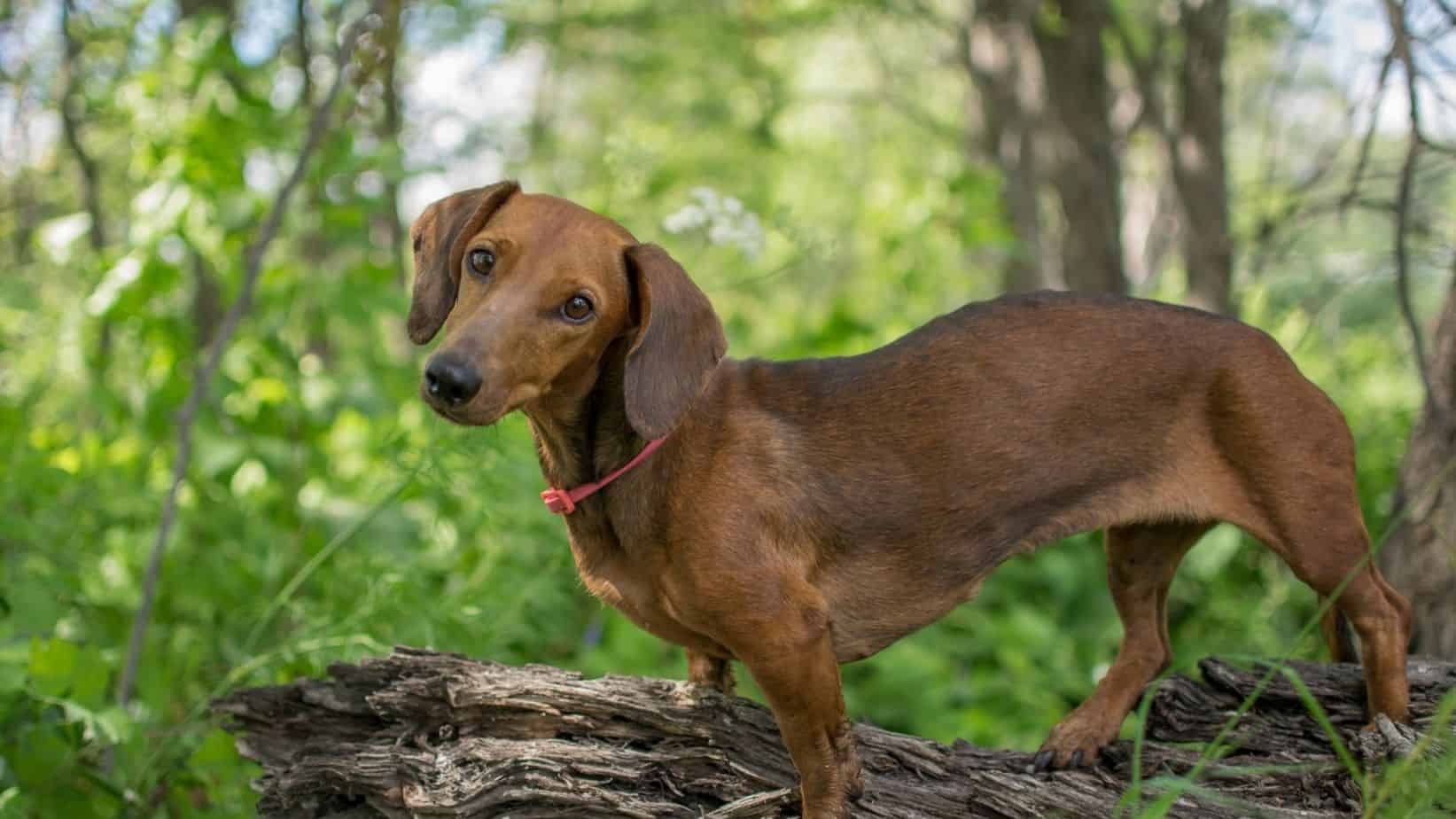 The Dachshund is an iconic breed that is one of the most popular domestic dogs in the world. Everyone loves their unique shape and liken them to wieners or sausages.

However, It’s a popular misconception that Dachshunds have long bodies when, in fact, it only appears this way due to their shortened legs, which are caused by a form of dwarfism called Chondrodysplasia.

If your Dachshund has a bit more height than the average, it should not be a point of concern unless you plan to show them in Kennel Club competitions.

Your longer-legged Dachshund may even have health advantages over their standard confirmation cousins! However, it is unlikely that your Dachshund is a purebred.

Why Do Dachshunds Have Short Legs?

In 2009, The National Human Genome Research Institute identified a singular event in the modern short-legged dog’s history. An extra gene was acquired some 300 years ago in a single mutation event in the dawn of selective dog breeding.

The retrogene encoded fibroblast growth factor 4 or FGF4 is strongly connected to the condition called Chondrodysplasia, a short legend phenotype evident in several breeds, including Dachshunds, Bassets, and Corgis.

Dogs with shorter legs such as basset hounds and Dachshunds increased their prowess as hounds by being close to the ground for scenting prey and catching them in smaller areas such as burrows and holes.

This retrogene is responsible for the overproduction of FGF4 protein that researchers suspect may affect key growth receptors at the incorrect time during fetal development. The long bone development is affected due to the calcification of growth plates, creating short legs with a curved appearance.

This trait called Chondrodysplasia is a form of disproportionate dwarfism and is part of the American Kennel club standard in the Dachshund breed.

How Long Should a Dachshund’s legs Be?

Although there is no definitive leg measurement embraced by official Kennel Unions, the standard breed size standard for Dachshunds is:’

There is a generally accepted guidance relating to height to length ratios in Dachshund breed standards. The ACK states that the wither’s height (top of the shoulder) should be half of the Dachshund body length, measured from the breastbone to the rear thigh.

Dachshunds should not be too long or too low to the ground. Dogs shorter than 2:1 are preferred, while the FCI standards expect a ratio of 1.7:1 and 1.8:1, taller than the US and UK standards.

Generally, the accepted standard dachshund conformation shows an average of 75% body depth and 25% ground clearance as the ideal.

Can My Purebred Dachshund Have Long Legs?

Although proportions as low as 1.6:1 have been accepted in Dachshund breeding, the optimal ratio is 1.8:1 in showing circles. Although there are small differences in proportion that seem to be accepted, a Dachshund must be longer than taller to meet the official breed standard. Extreme variations may cause health complications, such as movement difficulties.

If your Dachshund legs are longer than the breed standard, it could mean that your Dachshund may not be purebred. Unfortunately, unscrupulous breeders have been known to fake certification or allow undisclosed interbreeding to remain secret.

If your purebred Dachshund has longer legs than the average, it may be due to a genetic variation within a pedigreed litter. If your pup has long legs, it does not necessarily mean that your dog is not pedigreed. The Wire Haired coat variation is noted for longer leg length than other coat varieties but only within an inch or so.

There are occurrences in many breeds where one of a litter does not conform to breed standards due to silent gene activation in the breeding process. This variation does not mean your Dachshund is not purebred, and your pup will be happy and healthy. This variation simply means your Dachshund will not be successful as a show dog.

By the nature of their genetics and build, Dachshunds are more likely to suffer from back problems such as intervertebral disc disease (IVDD.) Dachshunds are particularly prone to this condition due to the effects of Chondrodysplasia on their cartilage formation.

Confirmation and body condition has been linked to IVDD, especially in increased back length to height at the withers.

There have been concerns over the excessive length and limited ground clearance as an increased health risk in Dachshunds. It stands to reason that your long-legged Dachshund with longer legs may be less prone to these back ailments due to the stability provided by the longer limb structure.

Why Do They Advertise Purebred Long Legged Dachshunds?

There is no shortage of opportunistic breeders who want to charge pedigree prices for their “special” variations of a particular breed. If someone is advertising a long-legged purebred Dachshund, you can be guaranteed that it is a ruse, and you should avoid them at all costs.

There is no long-legged variation of Dachshunds that is recognized as a breed standard worldwide. Although purebred litter may contain a genetic anomaly, this is rather the exception than the norm, and although the pup will be healthy and happy, the puppy will not be considered for showing.

Unscrupulous breeders create the growing trend of ‘pedigreed variations’ to mislead the public and offer pets that are not purebred for elevated prices.

This fact highlights the importance of finding reputable and established breeders with a proven track record to produce high-quality standard specific breeds.

Suppose new owners accept variations that are not standard to the breed? In that case, the result may be a muddying of the beautiful genetic strain that created this charismatic and stubbornly loveable breed. With a purebred Dachshund, you know you will always be blessed with a quirky sidekick every Dachshund owner has come to love.

If you liked this article, you can check out another one I wrote about the sizes of different Dachshund variations and how fast they grow by clicking here.