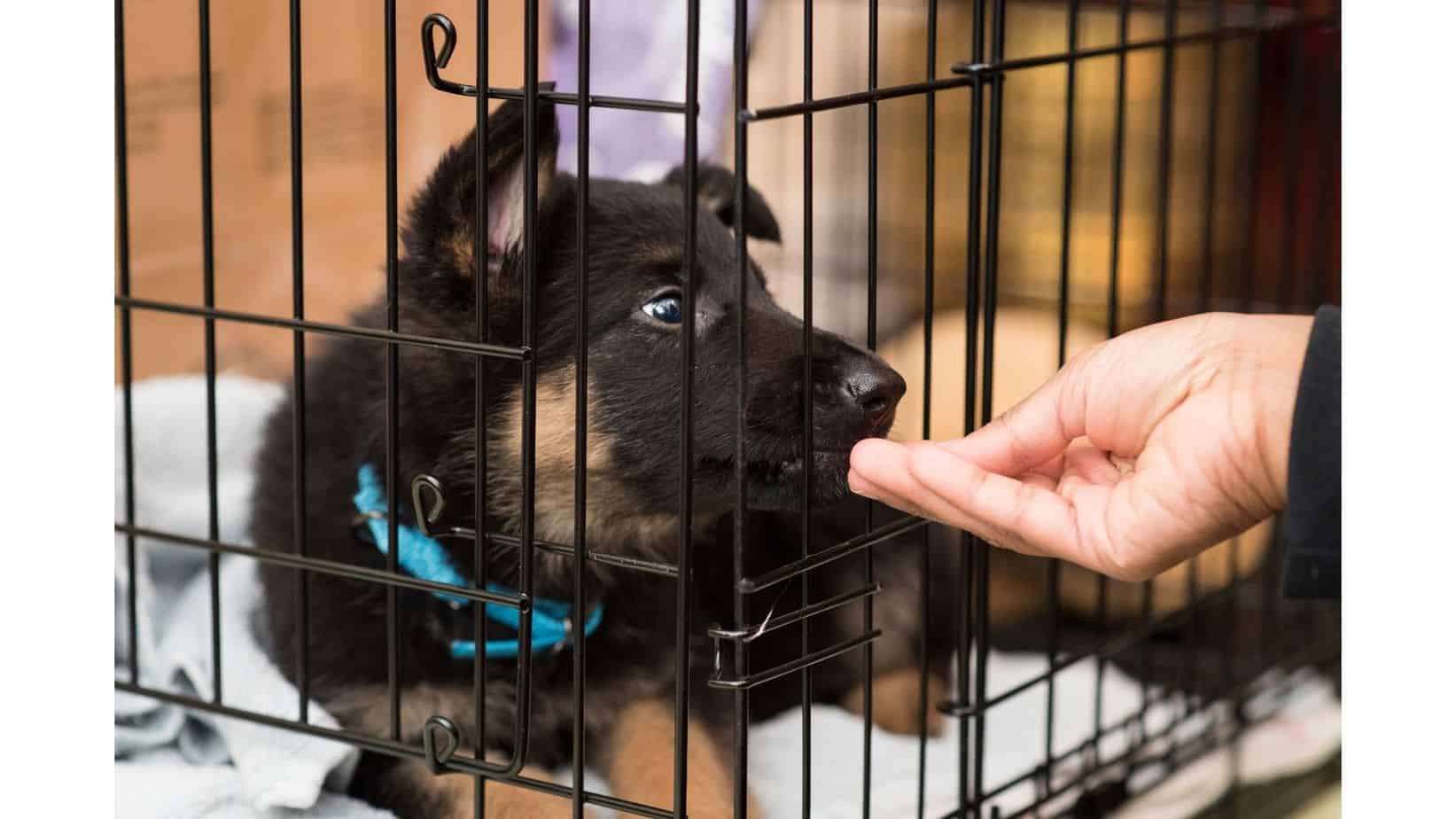 Current and prospective German Shepherd owners often want to verify how purebred their dog is, as well as what that could mean for the dog.

Blue eyes (a rare genetic variation), green eyes, and amber eyes can each occur in a German Shepherd, though the purebred label may vary depending AKC guidelines and opinion.

In this article, we will take a look at how eye color works in this breed and learn about associated conditions like heterochromia!

How Does a German Shepherd Get These Different Non-Brown Eye Colors?

Genetics play a role in a German Shepherd’s eye color. Brown is the most common eye color for this breed, and the shade of the eye color can be blue, green, brown, or gray. German Shepherds in the puppy stage have blue eyes.

This is because puppies don’t yet have melanin in their eyes, but they develop it over the first several months of life. (The same thing occurs in kittens.)

This blue color can fade into one of the previously mentioned colors in adulthood.

This condition is not abnormal, but it is rare. It is not considered a health concern.

Occasionally, a German Shepherd may even have just one blue eye or one eye with a variation of blue coloring in it. This is a case of heterochromia, which we’ll talk about in more detail later on.

Other colors in German Shepherds include green and brown colors, which can be light or dark.

Are Blue, Green, or Amber Eyes Bad for This Particular Dog Breed?

These colors don’t indicate a German Shepherd in bad health. Some people speculate about whether the dog is truly purebred if they don’t exhibit the typical brown eye color.

In official dog shows, German Shepherds that don’t have brown eyes may even get turned away from the competition because breeders don’t accept the blue eye color as purebred.

These days, people are more widely accepting varying eye colors in the German Shepherd breed as unique and distinguishing traits. However, there are still some breeders and members of the AKC who see the blue eye color as a faulty trait.

Thankfully, you don’t have to worry about the dog’s health in correlation to these eye colors.

How Can I Tell if My German Shepherd Has the Genetics for These Different Eye Colors?

We can use this knowledge to make a rough prediction of whether a German Shepherd puppy might have specific eye colorations as an adult.

What Does a “Blue” Coat Say About Potential German Shepherd Eye Colors?

As previously established, speckled or merled dog coats can be an indication that the eyes will also show discolorations. In the German Shepherd breed, recessive genes can cause the normally black fur to show up as a diluted blue- or silver-gray (“blue German Shepherd”).

In cases of blue German Shepherds, the dog’s eye color is typically diluted as well, making the eye color turn out to be green, light brown (amber), yellow, or even blue.

Can The German Shepherd Breed Have Heterochromia, and How Does That Happen?

This condition actually occurs in three different forms, including the following:

It’s also worth noting that a dog’s coat coloring can influence heterochromia. According to Hill’s Pet, we are most likely going to find the heterochromia condition in dogs who have coat patterns like merle or dappled.

Sometimes, dogs with white fur near their heads can have the condition as well. Some of the breeds that commonly have heterochromia iridis include Australian shepherds, huskies, dalmatians, cattle dogs, and a few others. With any other breeds having heterochromia, it’s most likely going to be central heterochromia or sectoral heterochromia.

Since heterochromia can appear similar to the way that conditions like glaucoma or cataracts present in dogs, it is essential to ask a veterinarian to check your dog’s eyes to rule out any signs of vision ailment.

Does This Particular Dog Breed Have Health Problems Associated with the Genetics for Different Eye Colors?

Good news! As mentioned before, German Shepherds exhibiting atypical eye colors are not at any specific health risk.

In the Case of Acquired Heterochromia

However, if your dog has acquired heterochromia (due to an injury or already existing health issue), you will want to consider your dog’s health. While heterochromia isn’t the cause of the health issues, the injury that caused the eye color condition likely needs appropriate veterinary attention.

Any health condition that could have caused heterochromia may lead to other health issues down the line, so a vet’s check is essential.

Most owners of purebred dogs want to ensure the health and wellness of their pets. And they have a right to do so. German shepherd owners often have concern over their dog’s eye color and what this may or may not mean about the dog’s health and genetics.

Conditions like heterochromia, recessive genes, and coat coloring can influence a German Shepherd’s eye color, but they aren’t a cause of bad health.

Keep in mind that German Shepherds typically present brown eyes, but they can also have varying shades of brown, gray, green, or even blue eyes.

While blue eyes are due to recessive genes, they are not inherently unhealthy for a German Shepherd. Further, they don’t make the dog any less purebred, despite the negative opinions cast by some breeders and AKC officials.

Your dog’s eye color is bound to be unique, depending on a variety of factors.