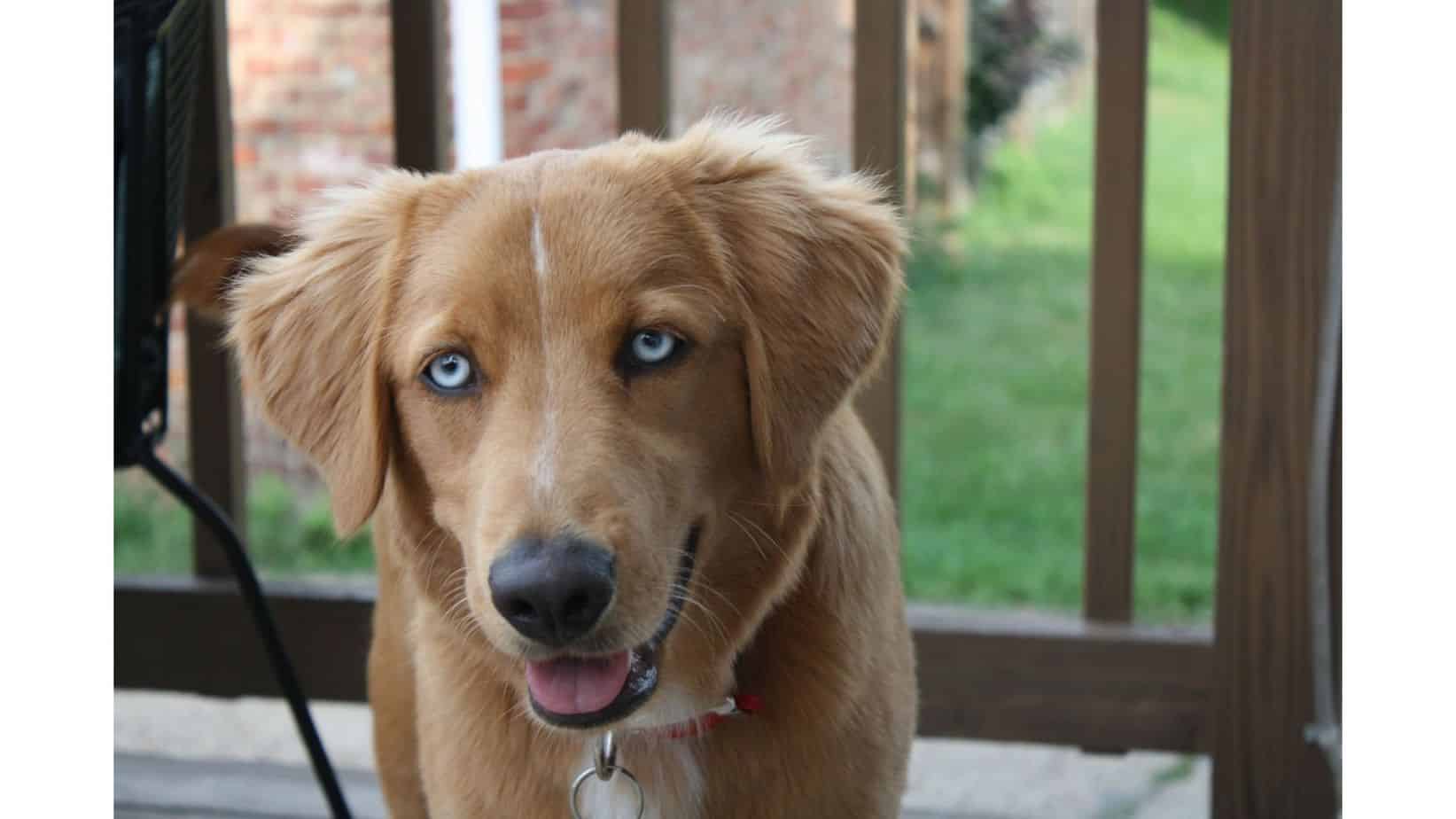 Almost all purebred Golden Retrievers will have brown eyes. On rare occasions, a Golden Retriever may have yellow, green, or blue eyes. But this is usually a sign of a mixed breed, a health issue, or that your pup hasn’t yet reached adulthood.

You may have seen some adorable pictures of tiny Golden Retriever puppies, rolling about, and flashing their beautiful blue eyes to the camera.

I know I sure have, and I’ve received plenty of messages and emails, all asking the same thing: is it possible for a breed standard Golden Retriever to have non-brown eyes?

Of course, we are already aware that the collective expert opinion is ‘probably not’. The American Kennel Club’s Official Standard for the Golden Retriever describes the breed’s eyes as “friendly and intelligent in expression … color preferably dark brown; medium brown acceptable.”

So, why do some Golden Retrievers have blue eyes? Or green, or yellow? How do dogs get these variant eye colors? And how can you tell what your dog’s eye color will be?

How Does A Golden Retriever Get These Different Eye Colors?

In general, three factors will decide the eye color of a Golden Retriever: breed, genetics, and medical conditions:

The UK’s Kennel Club’s breed guide unambiguously describes the Golden Retriever as having “dark brown” eyes which are “set well apart” and with “dark rims.”

This squares with mainstream expert opinion. Dark brown eyes are simply a genetic feature of the breed, and many consider the darker a Golden Retriever’s eyes, the better.

For instance, any who seek a Golden Retriever will also use the dark eyes rule to avoid purchasing a mix. It is that unlikely to come across a healthy, full bred adult Golden with deep, blue eyes without a medical issue.

As you may already know, Golden Retriever puppies aren’t born with the best of eyesight. Like all puppies, they are born blind and deaf and don’t open their eyes and ears until the second week of life.

When they do, you may notice that their eyes are a blue color. This is due to a lack of pigment forming when the puppy is very young, something which is corrected as their eyesight improves.

Therefore, if you see a Golden Retriever puppy with light blue eyes, you know it can’t see particularly well – yet.

Green eyes are especially uncommon in Golden Retrievers, but like blue eyes do happen and can be accounted for. If you have a Golden Retriever with green eyes, the chances are it is a mix, or is suffering from a medical issue that is turning its eyes a greenish color.

However, some Golden Retrievers may also have what appears to be yellow eyes and can still technically be classified as purebreds.

This would occur when the pup has some sort of genetic fault that prevents the brown pigment of its eyes from showing fully, resulting in eye colors that range from golden to amber.

Yellow or Amber eyes are often not indicative of any medical or genetic issue you should be concerned about. A golden retriever with yellow or amber eyes likely will still be considered an acceptable true breed.

How Can I Tell If My Golden Has The Genetics For These Different Eye Colors?

If your Golden Retriever is a purebred without any medical conditions, it will almost certainly have standard brown eyes. However, the pigment of each dog is different, so while some Goldens will have dark hazel eyes, others may appear slightly more amber.

This also means that your Golden Retriever may show a genetic abnormality, resulting in yellow or golden eyes. This is rather unusual but leaves dogs looking unique among others their age while still being considered pure breeds.

If your Golden Retriever is a cross with one of the following breeds, your dog is likely to reach adulthood with blue or green eyes. This list is not exhaustive, but accounts for some of the most popular mixes and those with the highest chance of blue or green eyes:

Are Blue, Yellow Or Green Eyes Bad For Golden Retrievers?

Blue, green, or yellow eyes aren’t always a sign of a health condition. More often than not, they can simply be explained by a mixed genealogy or a harmless genetic abnormality.

However, in some rare circumstances, your dog’s eye color changing could be a symptom of a health issue starting to show itself that, if left untreated, could cause serious problems for your pup.

Does A Golden Retriever Have One Of These 3 Health Problems Associated With The Genetics For Different Eye Colors?

A particular eye color is not in itself a symptom of any specific health problem. But in general, a changing of your dog’s eye color could be a symptom of a worsening condition.

In general, three eye conditions may result in a changing of your Golden Retriever’s eye color to a grey, blue, or green color.

Remember: if you notice any change in the color of your dog’s eyes (or any change in your pet’s appearance, for that matter) it is best to take it to the vet as soon as you can for a professional evaluation.

Cataracts are a common and quite serious condition where the lens of your dog’s eye clouds a greyish-blue color. It is usually the result of a water imbalance.

As the lens clouds, it becomes harder and harder for light to reach your dog’s retina, eventually causing blindness.

Nuclear Sclerosis is a generally less severe condition, resulting from the crowding of inward fibres in the lens of your pup’s eyes. It can generate very slowly and rarely causes pain or severe loss in vision, often meaning that the condition is not diagnosed until it has progressed.

One of the main symptoms of Nuclear Sclerosis in dogs is a milky, greyish-blue clouding in your dog’s eyes, which could at first be mistaken for reverting to your dog’s youthful blues. This is extremely common in older dogs, although some dogs will be more visually affected than others.

Glaucoma is a potentially painful condition for your dog which results from high pressure inside the eye. If left untreated, it can eventually lead to complete blindness.

There is no cure for Glaucoma, but the condition can be managed with routine medication. Glaucoma causes the eye to become cloudy, which in Golden Retrievers could at first appear to be bluing of the eye’s pigment.

Can A Golden Retriever Have Heterochromia, And How Does That Happen?

Heterochromia is a pigment condition in which a dog will have two different colored eyes. It is often referred to as “odd eyes.”

It is almost always harmless and often lends beautiful originality to the dog. However, it can also come alongside uncomfortable conditions for pets, like as the result of inflammation or injury.

Generally, Golden Retrievers have brown eyes. It is a feature of the breed, dating back to its first outings as hunting companions in 19th century Scotland.

However, this is not to say that Golden Retrievers cannot have blue, green, yellow, or amber eyes. These features are common in mixes, can be the result of a random genetic abnormality, or could be symptomatic of a developing medical condition.

Golden retriever puppies often have blue eyes, which darken with age. However, if an older dog’s eyes begin to turn blue, this is likely a symptom of developing cataracts, nuclear sclerosis, or glaucoma.