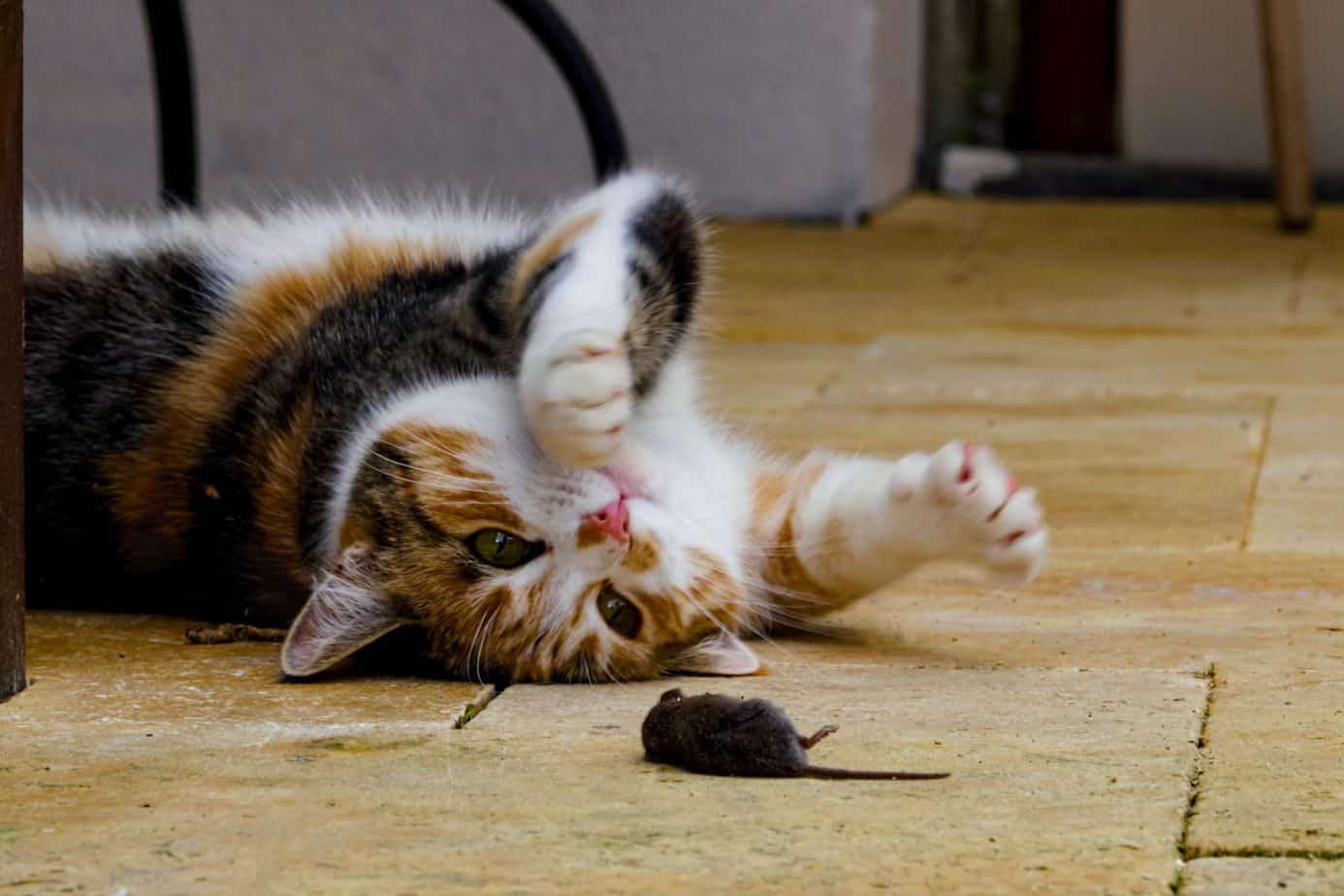 Can house cats eat mice? This is a common question among cat owners who are worried that their pets may get sick after eating a mouse.

After all, many cat parents are quite familiar with the dead mice or “gifts” their cat may bring them and drop at their feet after time spent outside. Nasty!

The answer is yes, house cats can eat mice, but are unlikely to do so if well fed, as cats would rather present the dead mice as trophies to their owners. There are also some health risks involved with your cat actually eating a mouse, particularly if you already have rodent poisons set up around the house.

Cats are carnivorous and mainly feed on mice and birds. They are rodent hunters and some people, particularly farmers and non-city dwellers, keep them to hunt and eliminate rodents from their homes. It may seem unusual and gross for a person to see a cat eating a mouse but for cats, it is normal to want to hunt.

Mice also contain some nutritional value to the cats and can provide some nutrients that the cats lack in their bodies.

The worms are passed on to the cat when the cat eats the mouse whether just a piece or the whole mouse. There is no way of knowing where the mouse has been and how healthy it is. It may be carrying parasites and diseases which may be passed to the cat after ingestion.

The risks that your cat may be susceptible to are mostly health risks, which will cause it to get sick. The diseases that the cat may get from the mice include :

If your cat starts behaving strangely after eating a mouse, visit the veterinarian as soon as possible!

Is It Normal for Indoor Cats to Hunt and Kill Mice?

Cats are natural born predators. It is in their nature to hunt for small rodents and birds. Even as kittens, they will demonstrate hunting behavior for their food. They may hunt for food for sport. Some cats present dead mice to owners as gifts. This occurs when the cats hunt for sport, exercise and play.

A cat will likely hunt and actually eat mice if it is hungry or has a deficiency in taurine.

Taurine is an essential amino acid that helps in the repair of body tissues. Cats’ bodies cannot manufacture enough taurine, and thus, they must consume it in their diet. Meat is the only thing with enough taurine that will meet the demand of a cat’s body. Cats also get moisture from their prey. They rarely drink water and thus hunt for prey.

Hunting is a natural survival instinct for cats. They hunt by stealth. They approach their prey slowly with caution, crawling forward on their bellies until they pounce.

Indoor cats hunt much less compared to outdoor cats. This is because they don’t have access to mice. Kittens are taught to hunt by their mother. Indoor cats often fail to learn this skill and that is why you will see them playing with anything they catch.

It is usual for your cat to want to hunt for mice, but unusual for a well-fed feline to eat them. If your house cat goes outdoors and hunts for mice or rodents, it is essential to deworm him and take him or her to the vet regularly. Also, observe your cat for any symptoms and abnormal activities, like eating way more or way less than usual.

Is It Safe For a Cat to Eat Mice?

It is not always safe for a cat to eat a mouse. Mice can be dirty. They may carry bacteria, parasites, and diseases. Most of these parasites and diseases can be transmitted to cats. Some health hazards that may be caused by a house cat eating mice are:

Mice are not treated against worms. One’s cat may be free of the worms but the mice are not. A cat may get infected with worms such as roundworms by eating a mouse that has them.

The worm lives in the intestines of cats, but the larvae are found in the muscles. A cat does not have to eat a whole mouse for it to be infected. It may get infected by just eating a piece of the mouse.

This occurs if the mouse had ingested poison, and your cat eats it. This risk depends on how long the mouse ingested the poison and how much it ingested. Often if a cat is well fed, it will not eat the mouse but catch and take it to the owner.

Tularemia is common in rabbits and mice. Tularemia is dangerous and requires fast and aggressive treatment. It can be deadly if ignored and can lead to the death of your cat. If caught early enough, it can be cured.

This condition is passed on through fleas that feed on mice. The fleas carry the bacterial disease, which invades the cat’s blood when the fleas bite. In the blood, the bacteria travel to the lymph nodes where it mutates and impacts the lungs. The disease is fatal in senior cats if not treated.

This is a respiratory condition linked to mouse droppings. It is mostly symptomless to cats. Feline Hantavirus will present a severe respiratory infection to the cat. With time, this condition worsens and eventually renders a cat unable to breathe. It is treated with antibiotics.

This is a bacterial infection that damages the cat’s entire body. The bacteria is most common in mouse urine. A cat will consume urine if eating a mouse. The bacteria found in leptospirosis burrows into the skin of the cat. Leptospirosis can also make a cat infertile. Leptospirosis is highly contagious in cats.

It originates from fleas and mites that feed on mice. A rickettsia infection does not impact most cats. The immunity system of a cat often fights it if passed on.

Senior cats, though have a weak immune system, and they are a risk from the disease. The disease mainly manifests in the blood and nervous system. Rickettsia infection is contagious, and cats should be quarantined until full recovery is made. It is treated with antibiotics, and if captured early, the prognosis is good.

Mice play a host to parasites such as ticks, roundworms, and tapeworms. Ticks feed on multiple species of animals throughout their lifespan. Each animal may be carrying its disease.

The most dangerous problem is Lyme disease. Ticks do not need to attach themselves to cats to transmit the disease. If a tick’s body bursts when a cat bites a mouse, infected blood from the tick spills into the cat’s mouth, transmitting the disease.

Tapeworms live in an animal’s intestines. They are transmitted to a cat when the cat feats on mice. Tapeworms break apart and infect other parts of a cat’s body. Tapeworms do not cause any medical emergency but a heavy infestation may lead to the weight loss of your cat.

Also, tapeworms consume the cat’s food before it can be digested. Clean the cats litter regularly to eliminate the worms which are dispensed through the cat’s waste. This also prevents the worms from transferring from the cat to the owner.

Cats often chew on mice’s bones and swallow. The cat choking after eating a mouse bone is a minor risk. The small mouse bones could get lodged in a cat’s throat. Cats typically grind these bones down with their sharp teeth, and they are a source of calcium for the cats.

Actions To Take When Your Cat Catches a Mouse

When your cat catches a mouse, try as best to take the rodent away from it. You cannot know where the mouse has been and how healthy it is. The mouse may be carrying diseases or parasites, and you would prevent your cat from getting sick.

Feed your cat well with all supplements and nutrients such that it would not have to hunt for mice for any supplements.

When your cats eat a mouse, carefully monitor the cat’s behavior and health for anything out of the norm. Be on the lookout for symptoms such as vomiting, diarrhea, or any abnormal behavior.

This is because it is not possible to know where the mouse has been and the parasites it is carrying. The mouse may also be sick, thus transmitting diseases to your cat.

The mouse may also be poisoned and thus cause secondary poisoning to the cat. If you notice any symptoms, contact your veterinary doctor immediately.

Provide your cat with toys to play with so that it may not play with mice for sport and still get out its natural hunting instincts. Also, make your property a rodent-free environment as much as possible to prevent the cat from developing a sport of hunting live mice.