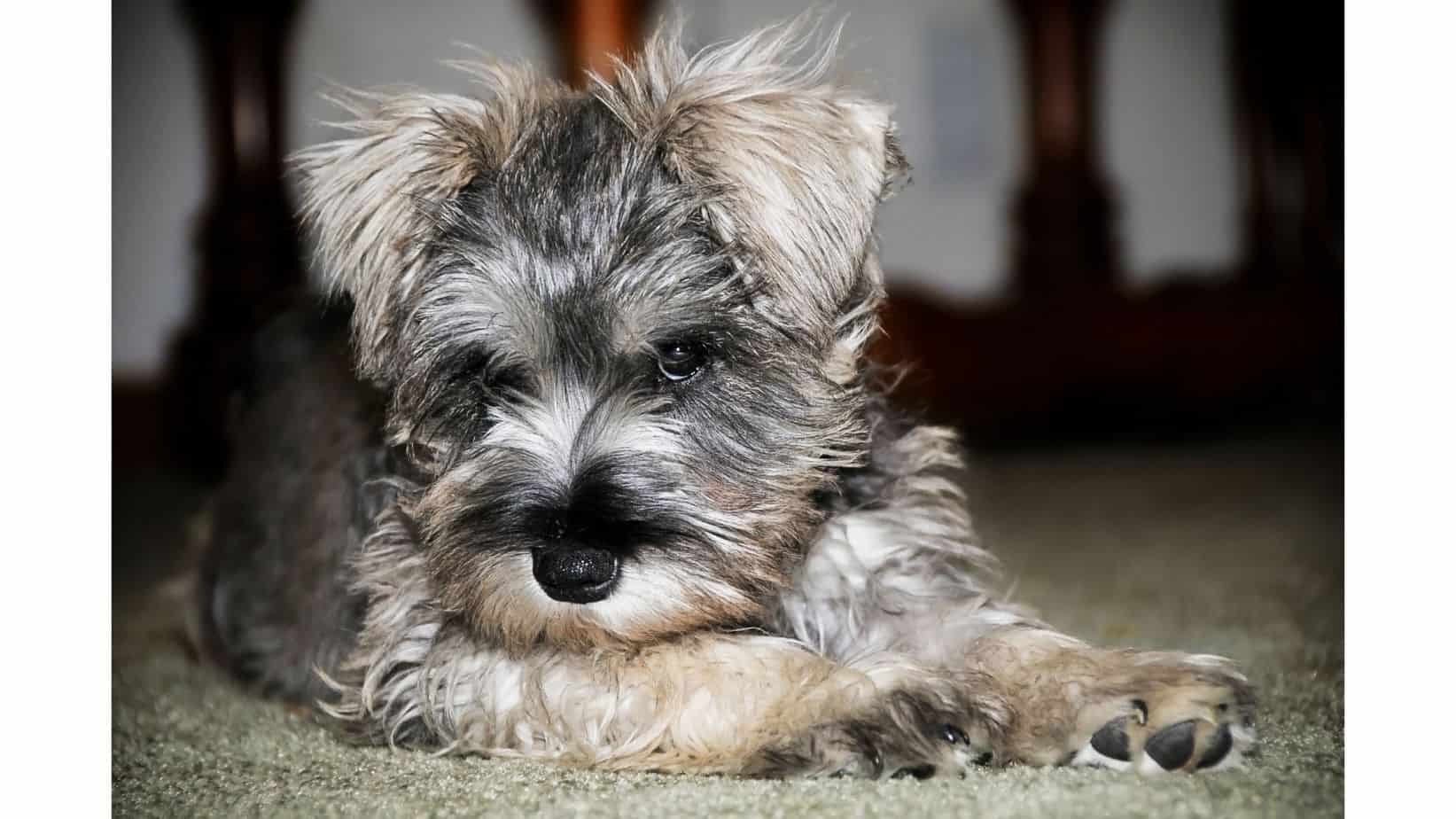 Owners of Miniature Schnauzers (as well as hopeful owners) often want to know how purebred their dog is and how its genetics will influence its health. There are things you can learn about a dog’s genetics based on its eye color, and the typical eye color of a purebred Mini Schnauzer is dark brown.

How Does a Miniature Schnauzer Get Blue Eyes? 2 Main Causes

While puppies in general can have blue eyes in their first few months, this trait typically goes away before adulthood. The color will begin to shift around 10 weeks of age.

Blue eyes in Mini Schnauzer puppies simply exist because the melanin is not yet present to give a distinct eye color. Without melanin present, the color we see is blue when light reflects off the puppy’s iris. It will change to brown or a shade of brown as the puppy ages, though.

Another way that a Miniature Schnauzer could get blue eyes is if it carries the merle genetics that occur in some dog breeds. The merle gene gives traits such as blended fur colors, which can also affect the coloring of paw pads, noses, and yes – eyes. The merle gene can cause the dog’s iris to be blue or a discoloration with blue.

Note that the merle gene occurs in breeds such as Australian Shepherd, American Foxhound, Sheepdogs, Collies, and a few others. This gene is not naturally found in Miniature Schnauzers.

So, if your Mini Schnauzer has blue eyes from the merle gene, you know they are not purebred. The AKC does not officially recognize merle genetics in Mini Schnauzers as truly purebred, either.

What Eye Colors Can Mini Schnauzers Have?

Miniature Schnauzers typically have dark brown (almost black) eyes. However, this can show up in differing shades, such as hazel or light brown.

As I mentioned before, Schnauzers can also have blue eyes if they carry the merle gene (this means they are not purebred). And blue eyes from the merle gene can present as a blue, light green, or even an amber shade in the iris.

I will discuss this in more detail below, but in short, the answer is yes. Blue eyes can be potentially bad for Mini Schnauzers because of the reason they have blue eyes – genetics.

Certain genetic factors that lead to blue eyes in dogs carry a risk for eye complications and abnormalities that could be serious.

How Can I Tell if My Schnauzer Has the Genetics for These Different Eye Colors?

All you really need to know about the genetics associated with your dog’s eye color is that the dog’s eyes won’t typically be blue without the merle gene.

If you want to determine if your dog has the merle gene, then you may base this off of whether its fur, paw pads, or nose exhibits the typical merle patterns.

Merle is a dilution gene, so it makes these areas on the dog have an uneven spread of colors, while the color is more normal in other parts. It will also affect the pigment of the skin below.

However, if you want to be sure about whether your Schnauzer has the merle gene that would create blue eyes, you can speak with your veterinarian about possibly getting your dog genetically tested.

Do Miniature Schnauzers Have Health Problems Associated with the Genetics for Different Eye Colors?

While the presence of blue eyes in their own right is not unhealthy, the reason for the blue eyes can cause health problems. I mentioned earlier that the merle gene is the cause of blue eyes in Mini Schnauzers.

Well, this gene unfortunately can cause various different congenital eye health issues and abnormalities in some cases.

An abnormality called iris coloboma can occur with merle genetics. According to Akorn Animal Health, this abnormality can cause the outside of the pupil area to have a cleft or notch. This is because part of the iris didn’t fully develop itself.

Severe cases of this condition can make a dog sensitive to light, with discomfort when light is too bright. But in milder cases, the symptoms are minimal and don’t affect the dog’s comfort levels too much.

Another condition that the merle gene can create is microphthalmia, which is an abnormally small eye. In bad cases of this condition, the dog may go blind or be born blind.

The main symptoms of this condition include blindness, partial vision loss, partial deafness, anxiety and poor social behavior, confusion, and clumsiness, among others.

Additionally, merle genetics can in some cases cause cataracts in dogs. The effects of cataracts range from slight vision impairment to total blindness.

You may be able to tell if your dog has cataracts based on the cloudiness present in the eyes, but a veterinary ophthalmologist can determine for sure. If you don’t catch cataracts early on in their development, they could lead to glaucoma.

Glaucoma is very painful for dogs, so you definitely want to be on top of this possibility if your dog has merle genetics or blue eyes.

We know that puppies grow out of their blue eyes eventually, but if your Miniature Schnauzer has blue eyes as an adult, you can determine a couple of things.

One, the dog is probably not purebred. And two, your Mini Schnauzer likely has inherited the merle gene (found in other dog breeds) that could potentially affect its eye health.

Reputable Mini Schnauzer breeders won’t go forward breeding dogs that exhibit the health conditions of merle genetics. But, if you’re worried about your dog or a dog you may be getting from a breeder soon, ask your vet to do a Companion Animal Eye Registry (CAER) Exam.