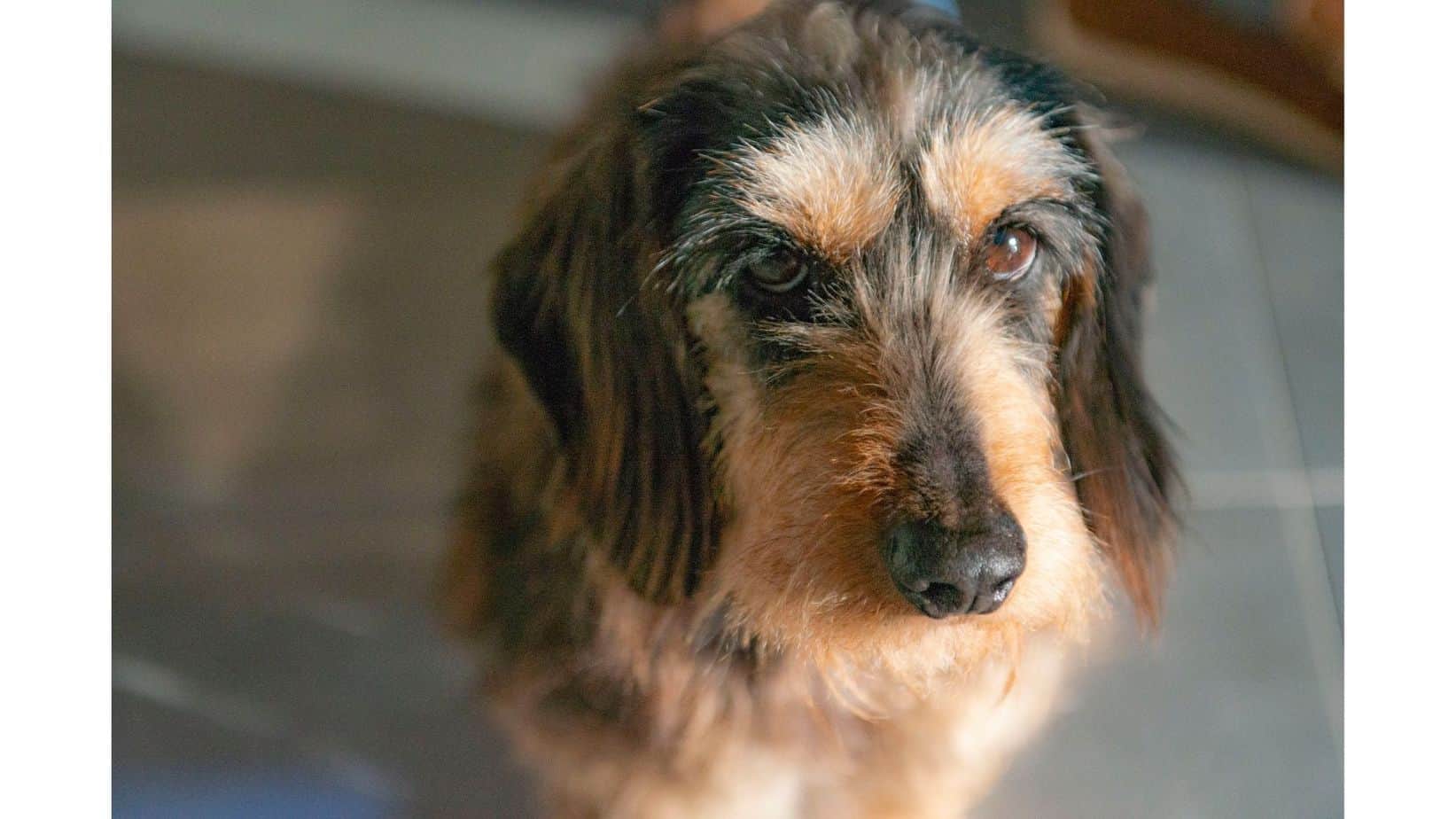 Dachshunds come in a variety of shapes and sizes, and their coats are no different. As well as a variety of colors and patterns, the Dachshund breed has three distinct coat types.

Most of us know that the Dachshund may be Smooth, Longhaired, and Wirehaired, but what does a double coat mean, and does your Dachshund have one?

Dachshunds have a double coat in the Wirehaired variety, which has a downy and dense undercoat layer and a wiry and thick layer of guard hairs or outer coat. Double coats provide dogs with protection from extreme temperatures, and the thick inner layer of the coat insulates their body with a trapped layer of air.

Although the Longhaired Dachshund variety has a thicker coat than the Smooth, the AKC and UK breed standard makes it clear that the coat should not be thick or fluffy. This distinction means that the breed standard is single coated for Smooth and Longhair and double coated for the Wirehaired variety.

If you would like to know what kind of coat your Dachshund has, and how their coats came about, please read on.

What Kind of Coat Does A Dachshund Have?

The original Dachshund sported shorter fur, which experts speculate could have included the Pinscher and the German Shorthaired Pointer.

The majority of US dachshunds are the shorthaired variety, which has shiny and soft coats that don’t require much grooming. Smooth haired Dachshunds or “Smooth” have dense fur that is neither too long nor too thick according to AKC breed standards.

Longhaired Dachshunds emerged from the selective breeding of longer coated puppies and the interbreeding of Dachshunds with various land and water spaniels, such as the  German Stoeberhund.

The AKC describes the Longhaired Dachshund as having sleek and glistening hair that is often wavy. The hair is usually longer on the chest and under the neck and ears, and behind the legs and the dog’s underside.

Longhaired Dachshunds do need more frequent brushing and grooming depending on the thickness of their coat.

Wirehaired Dachshunds were the last to emerge from the original breed in the late 19th century. Experts suggest that they arose from interbreeding between the Smooth Dachshund and various hard-coated terriers and wire coated Pinschers like the Schnauzer and the Dandie Dinmont Terrier.

The Wirehaired dachshund has a double coat, with a thick undercoat and a layer of wiry guard hairs as an outer coat. The AKC breed Standard describes the coat as “tight, short, hard rough and thick” with softer shorter undercoat hairs.

The Wirehaired coat requires plucking and hand stripping throughout the year with frequent eyebrow and beard trims and bi-weekly brushing.

Plucking and hand stripping involves pulling out the dead top coat and allowing the new coat to grow and is carried out by a stripping knife or but hand plucking.

Does a Dachshund Have Hair or Fur?

Scientifically speaking, the term hair or fur are mutually interchangeable because they share the same chemical make up.

Chemically, both hair and fur are made up of a protein called keratin; however, the general distinction between hair and fur tends to lie in the number of strands that come from a single follicle opening.

People typically refer to hair when animals have a simple hair follicle structure, such as humans, horses, and cattle. In the dogs’ case, the follicles are considered compound when multiple hairs emerge from a single follicle.

Dogs are born with simple hair follicles that develop into compound structures of central hair surrounded by 3 to 15 smaller secondary hairs.

Dogs are further divided into single and double coated varieties. When a dog has a pronounced undercoat layer and an overcoat of guard hairs, it is double-coated, such as cold climate dogs and the Wirehaired Dachshund.

When a dog has prominent guard hairs and little or no downy undercoat such as the smooth-haired and shorthaired Dachshund varieties, they are said to be single coated.

What is a Double Coated Dachshund?

To understand distinguishes single-coated dogs from double-coated, we first need to look at what makes up your Dachshund’s coat. Dogs, including your Dachshund, all develop compound hair follicles as they grow and create several kinds of hairs:

The down hair (underfur/ground hair) is the inner layer of fur that is typically wavy or curly short and numerous. It insulates a dog’s skin by trapping a layer of dry air between the skin and the environment.

The awn hair is a hybrid between the down hair and the topmost guard hairs and start similar to guard hairs but thin out and become softer halfway through their growth stage. The part nearest the skin protects the skin much like a down hair, and the end hair protects from the water like the guard hair,

The top layer of your dog’s computer coat or guard hairs are generally coarser with straight shafts that protrude from the downy hair layers. The guard hair has the most gloss and pigment and functions to protect from sunlight and moisture. They also protect the skin from cuts and scratches.

Your Dachshund’s size, shape, and coat type are controlled by genetics and vary between the different breeds.

The only Dachshund breed that should be double-coated is the Wirehaired variety according to both UK and ACK standards as seen below:

How Can I Tell If My Dachshund is Double Coated?

If your longhaired Dachshund has been interbred, they may exhibit a double coat. An easy way to check if your dog has a double coat is to:

Each type of Dachshund coat has its own unique features and particular grooming requirements, and you should ensure that you know which kind of coat your sausage dog has.

If grooming is not your favorite task, then the Smoothhaired Dachshund is your best option that only requires a wipe with a damp cloth or a dog glove to look like a champion.

link to Do Maltese Dogs Get Cold? (Cold Weather Tips)

Maltese dogs can get cold easily due to their small size. Shorter-haired Maltese will feel the cold more than those with a long, full coat. How much the cold weather impacts your dog will...

Continue Reading
link to Can Maltese Be Left Alone For Very Long? (Explained For Beginners)

When deciding to take home a furry friend, there are certainly many factors you will need to consider. Finding the perfect addition to your home takes a little research, but at the end of the...