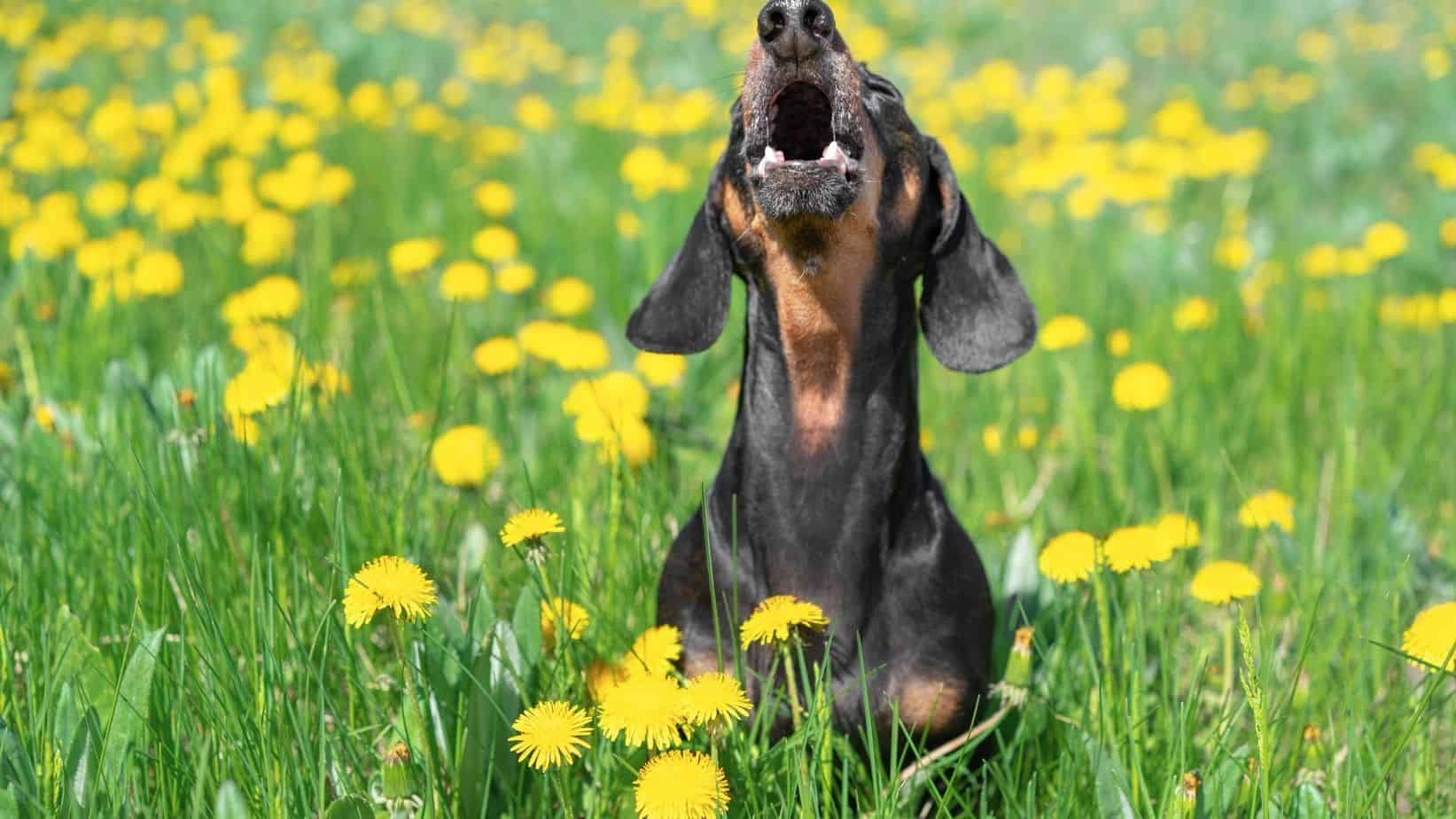 Your Dachshund may have diverged from their wolfish ancestors between 20,000 to 40,000 years ago, but they still carry their wolfish genes. One of the wolfish behaviors Dachshunds love to indulge in is a good old-fashioned howl, which is not always a great habit when living in close proximity to our neighbors.

Your little hunter has plenty of wolf in them and will often howl given a reason or opportunity. Excessive howling may be problematic, and you may need to take steps to keep the peace. If you would like to understand why your Dachshund howls and how to stop the howling behavior, please read on.

Just because your Dachshund is a loveable sausage-shaped companion doesn’t mean that your pet does not retain the fundamental instincts of its wolf ancestors.  In the wild, wolves still exhibit a strong howling response in response to isolation, territory protection, and to determine the location of members of their pack.

Your Dachshund may not be warning other animals to stay out of their territory or pinpointing members of their hunting pack. However, they still use their ancestral howls as a form of communication with their human ‘pack.’

Dachshunds are one of the few hunting dogs bred to hunt above and below ground, and the Dachshund has a deep and loud voice that enabled early owners to locate their Dachshund in deeper burrows.

Although their wolfish past is 40,000 years behind them, dachshunds still use their howl to communicate with their owners. In a wolf pack study, researchers found that wolves howled more when separated from their mates and close family members than other members of the pack, even the leader.

This evidence supports the notion that howling can be primarily an emotion-based response; however, there are other reasons to consider.

Dachshunds form close bonds with their owners and become distressed when separated from their loved ones for extended periods.

Many Dachshund owners become aware of the problem via neighbor complaints while they are away from their pets. The howling is a signal of distress and is usually accompanied by agitated behaviors such as pacing, destructive actions, and depression.

A Need For Attention

Dachshunds are highly intelligent and sociable creatures and may use howling as a device to achieve their owner’s undivided attention. This canine manipulation works well and is often rewarded with attention, albeit an owner’s attempt to restore the peace.

Owners should avoid responding to Dachshunds when they use a howl as an attention device and avoid eye contact (and really all contact) until the dog has stopped their howling behavior.

Only reward your Dachshund with attention when they are quiet, and refrain from negative reactions to the howling as well, because negative attention will also feed the howling behavior.

A Means of Location

When your Dachshund howls when you approach your home, or at the sound of your car, they are essentially guiding you back to the home.

Howling as a Response to External Sounds

Dachshunds and other modern canines often respond to high-pitched tones, music, and sirens with a corresponding howl. Experts suggest that their similarity to other canine howls triggers the response to these sounds.

In the wild, wolves often howl to affirm their territory and deflect intruders, and often this will stimulate the rest of the pack to join their chorus. Your ever-alert hunting Dachshund may be saying ‘stay out of my territory’ or ‘here I am’ in response.

How To Stop Your Dachshund From Howling

If your Dachshund Is Howling From Separation Anxiety

The best solution to separation triggered howling is to provide company for your Dachshund. Doggy daycare is a great option to leave your pup with a trusted friend, or a relative will usually help the situation.

If you cannot provide companionship, it helps to leave a television or radio as a sound source that can comfort your pet or clothing with your scent to cuddle. Chew treats or toys can also relieve your pet’s stress and provide a distraction from your absence.

If Your Dachshund is Howling at external Triggers:

When your pet howls in response to music, sounds, or sirens, the howling will usually cease as soon as the triggering sound ends. Generally, these howl responses should be short-lived; however, if they become a problem, you may choose to desensitize your dog to the sound.

If sirens are a frequent trigger, you may decide to play a recording of a siren when your pet is calm and quiet and gradually desensitize your pet to the sound.

Each time your dog begins to exhibit alertness before the howl begins, praise your pet and reward them for quiet behavior with a treat so that your pet will associate the sound with a positive affirmation.

If Your Dog is Howling For Attention

If your Dachshund uses their howl as a tool to demand attention, the best way to stop the behavior is to ignore them. The trick is not to make eye contact or initiate contact with your pet until the howling has ended.

Once your pet stops howling, praise them, and offer them a treat to allow positive reinforcement to quiet behavior.

How Do I Make My Dachshund Howl?

There is little a Dachshund likes more than letting their voice be heard, and your Dachshund will love nothing better than a good howl. However, it is questionable whether you should encourage such behaviors because Dachshunds are smart and may take to howling as a habit.

If you do not have concerns about your neighbors and indulge in a howl with your Dachshund, the best way is to start the process yourself. Find a quiet space where the noise levels will not offend your other house residents or neighbors and let out a howl.

It helps to keep a sustained howl with increases in the register over time, much like a wolf howl. Throw back your head and make exaggerated wolf gestures, and very soon, your pet will be howling along beautifully.

If you do not wish to provide the tenor, you may use a recorded howl on your television or phone. Alternatively, use a musical instrument such as a harmonica or wood instruments such as clarinets or saxophone (if you have one handy.)

Just be aware you may be opening a Pandora’s box with your little hunter, and you have been warned 🙂

Dachshunds are a loving and vocal breed and will exhibit howling behaviors for several reasons. If howling is a problem in your home, you need to isolate what the trigger is before solving the problem.

Once you determine what your beloved Dachshund is trying to communicate, you may address the issue by desensitizing or positive reinforcement and lessen your Dachshund’s wolfish howls.