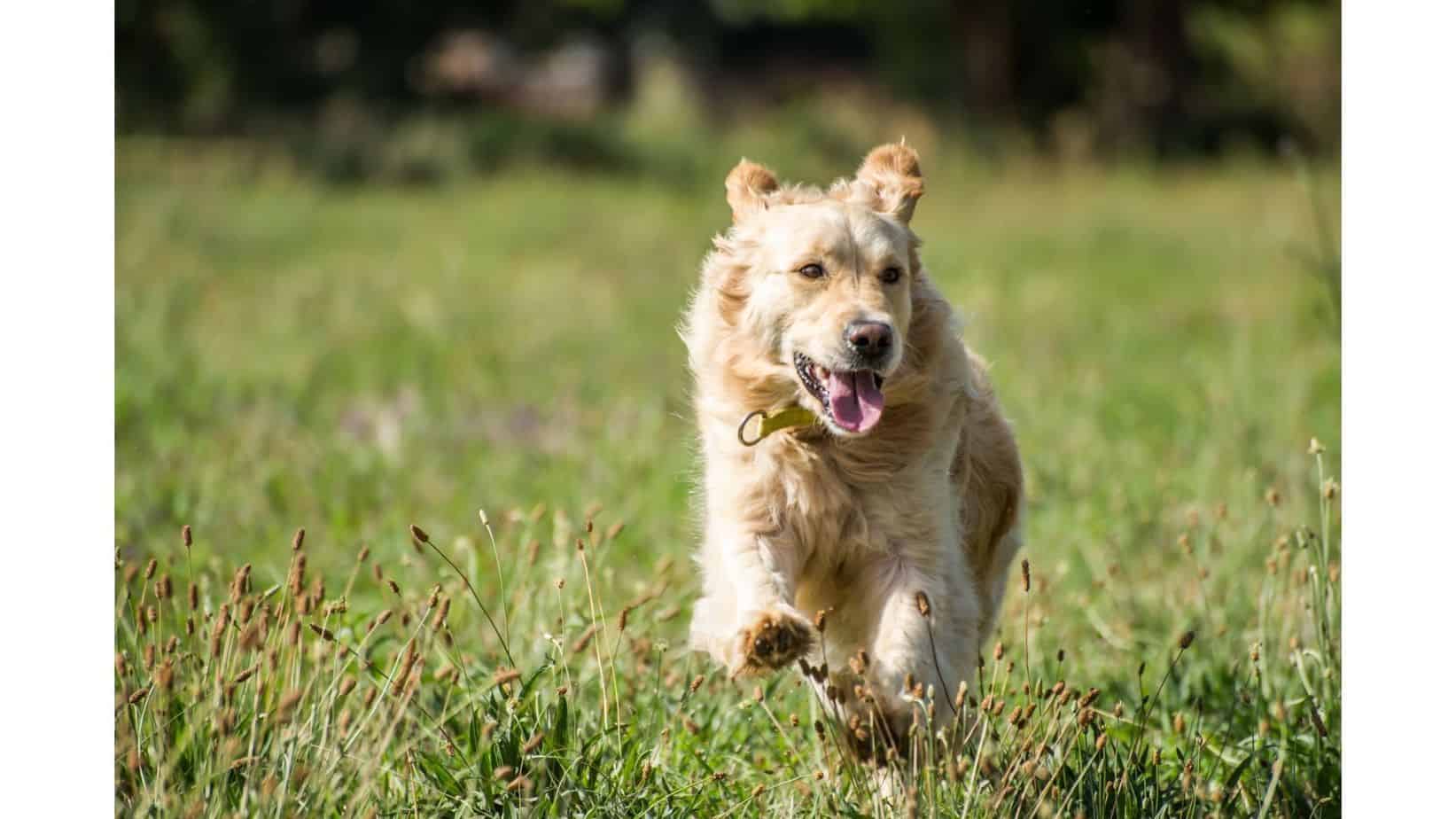 Having a Golden Retriever puppy is one of the greatest joys that life can offer, but it sure is hard work! And after a few weeks, all the potty training, chewing, boundless energy, and needle-sharp teeth can begin to wear even the most patient of owners.

So, when do Golden Retrievers really begin to mature?

It takes up to two years for a Golden Retriever to mature fully. Once they’ve passed the first angelic 6 months, they need a further 12-18 months to reach sexual maturity, and to finally calm down so that the teething, biting, and growing will have all but stopped.

All puppies are different, of course, but we tend to think or hope that Golden Retrievers are always calm, always collected, and always obedient. However, this is very rarely the case for any dog!

If you’re having problems with a hyper Golden Retriever puppy, we’re here to help.

Golden Retrievers are first and foremost working dogs. The ‘Retriever’ part of their name isn’t simply a cute title – it’s their job description! These dogs were bred to retrieve game and other hunted prey their owners had killed.

It means that working is in their blood, although today we don’t tend to put our dogs to work. But that means they have plenty of inherent energy that they need an outlet for. Golden Retrievers seem to have an endless amount of energy, and they’re always up for fun.

This is either a blessing or a curse, depending on how the owner looks at it. If a quiet, sedentary lapdog is what you’re after, then look elsewhere!

But if you have time and focus to channel all that wonderful doggy energy into training, then your Golden Retriever will no longer be a ‘hyper’ dog.

Both these breeds are very similar in temperament, which makes them both the most popular dog breeds in the country. They are high-energy, fun-loving and active breeds, with very similar needs.

It’s impossible to say whether one breed is calmer than the other. It’s thought that Golden Retrievers have the edge on their Labrador cousins when it comes to friendliness, so Labradors are usually a better choice as a guard dog but energy-wise, they’re really neck and neck.

What are Some Problems that Can Arise from Having a Hyper Golden Retriever?

If you have a hyper dog, then chances are that the problem has already arisen. As we’ve established, all dogs have a lot of energy when they’re young and some breeds have more than others. The Golden Retriever is one such breed.

Hyperactivity is the name we give to energy that’s unchanneled, and this is where you’ll find problems that won’t just go away. A hyper dog is a frustrated one and will demonstrate lots of unwanted behaviors that are harder to stop the longer they go on.

Chewing, barking (loudly), scratching, moulting and even biting and other aggressive behaviors can all be the result of a frustrated dog with too much energy to burn off. But a lot of the time it’s not just excess energy but boredom, too.

Dogs need more than just physical exercise. All the long walks in the world can still result in a hyper dog if there’s no mental stimulation to go along with those walks.

Golden Retrievers are incredibly intelligent, and they love to use their brains.

It means that training and learning games and tricks are ways to channel your Golden Retriever’s energy, and you don’t always even have to leave the house to do it.

Once your dog’s mental needs are met, you’ll find his physical energy levels aren’t quite so demanding.

When are Golden Retrievers Supposed to Stop Chewing or Biting?

Puppies learn from their mothers, and while they love to bite their siblings and parents when they’re tiny puppies, they soon have that behavior knocked out of them by a nip in return!

But when we take puppies home with us, they lose that parental guidance and so it’s up to their new owners to curb the biting. Puppies will go as far as you’re willing to let them.

Playing with them is a vital way to curbing biting, especially if the bites are too forceful.

By the time they’re 5 months old, Golden Retriever puppies should certainly no longer be biting with any kind of force. By this point, with correct training, they will know that as the owner you’re in charge, and you don’t tolerate them biting, unless it’s extremely soft and only ever in the contect of play.

But chewing is another issue. Dogs have very strong jaws and as they mature and they lose their baby teeth, they find relief in chewing and can even clean their teeth this way.

Your Golden Retriever puppy will begin to explore the world with his mouth between the ages of 3 and 6 months, and chewing begins as a way to curb the ache of teething jaws.

The problem comes when all their adult teeth have come in, but your dog’s still chewing.

By the time your dog is a year old, the chewing should definitely have stopped. They may still enjoy a chew toy, of course, but destructively chewing your property is a sign your dog has a behavioral issue that needs addressing.

When do Golden Retrievers Reach Sexual Maturity, and When Do They Need Neutering or Spaying?

By the time they’re around 9 to 12 months old, your Golden Retriever will be sexually mature.

In females, this means that they’ll have come into heat, so you’ll have noticed that they’ve bled and have attracted male dogs.

Golden Retriever males who are sexually mature display this by lifting their legs to urinate.

It’s true that some dogs can get a female pregnant when the male is as young as 5 months old but this is rare; the males don’t show much sexual interest until they approach the age of a year and their testosterone levels have peaked.

It’s important to make the decision around spaying or neutering your pet before they reach sexual maturity, so that you’re careful around other dogs. Females are very fertile when on heat and males from miles around can pick up the scent.

Males should be neutered once fully mature, so around the age of 12 months. Some experts advise on neutering a male once he’s been cocking his leg to urinate for around three months; this means he has fully matured and developed enough thanks to his hormones.

Female Golden Retrievers should be spayed when they’re around 5 or 6 months old, or before their first season. Early spaying of a female will reduce the risk of mammary and uterine cancers.

10 Helpful Tips to Calm Down a Golden Retriever

Unless you speak dog, you’ll never truly know your Golden Retriever’s needs, so it helps to eliminate one issue at a time, until you’ve cracked it. Try the following:

It may be more than one thing that’s causing your dog’s hyperactivity so don’t give up! Training and stimulation while your Golden Retriever is still young will mean the crazy days will soon be a thing of the past and the result will be a steadfast companion.