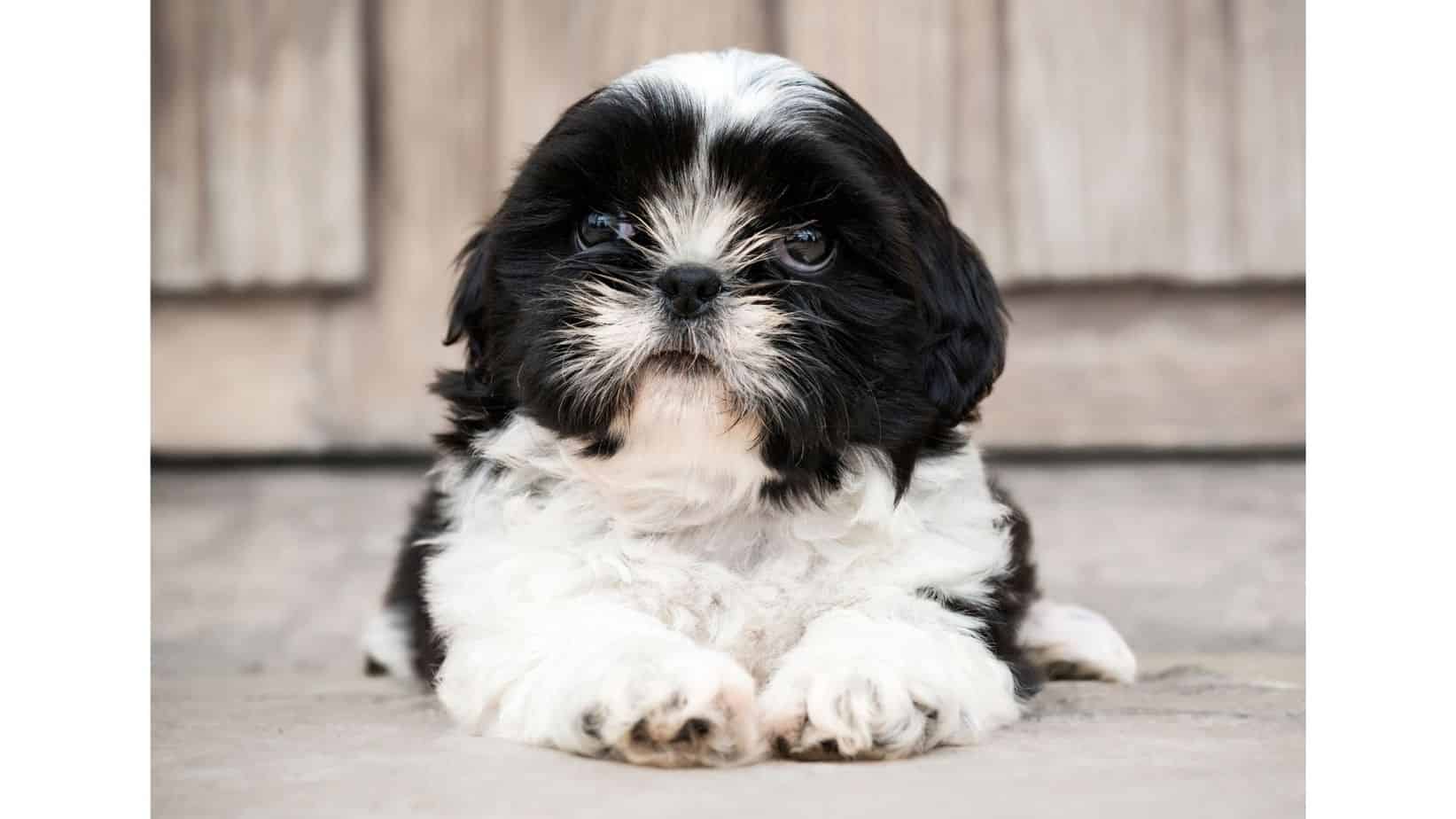 Can Shih Tzus be Black, Brindle, White, Brown or Black and White?

In short, the answer to this question is yes. There are 8 main colors of coats that Shih Tzu’s may possess: black, white, silver, red, gold, brindle, liver, and blue. There are also many combinations of these colors in coats, but some kennel clubs like the CKC ( Canadian Kennel Club) use the colors of noses, lips and even eye rims to classify purebreeds.

Unfortunately, the whole thing is actually pretty complicated. Fortunately, we will discuss all of it in great detail here.

What Makes a Shih Tzu a Purebred?

The color black is possibly the most rare Shih Tzu coat, but having a black nose and other skin points is common.

A pure black Shih Tzu will not have even an inkling of any other color, otherwise it will be considered to be a mixed color dog. Pure black Shih Tzus will also always possess black noses, and never brown ones.

Shih Tzu with all white coats are very similar to all black ones in that they are only considered pure white if both the coat and the nose are white. Unlike pure black Shih Tzus, white Shih Tzus can have brown noses, which officially makes them ‘liver’ colored.

On a technically, Shih Tzus that come out as cream colors are classified as white because there isn’t an option to list them as cream.

While this is true for the American Kennel Club, other kennel clubs might have slightly different options for this.

Other colors that aren’t as complicated are silver, red and gold. While cream isn’t acknowledged as its own color, silver is given it’s own place among the coat colors. Silver coats are classified as a shiny color that’s not neccesarily grey, and the dog usually has black pads, lips, eye rims and a black nose.

Red Shih Tzu coats are solid oranges or rust looking: similar to silver coats the dog’s skin points will typically be black. Gold is more of a tannish-yellow, and can range from tan/light brown to a rich golden color.

There are some Shih Tzu coat colors that have unique parameters that define them and otherwise set them apart from all the common colors we mentioned above. These are Brindle coats, liver color, and blue.

Brindle is not really a color, but rather a coat pattern. It’s best described as a solid color coat with streaks of another color throughout it. This means there is no specific set of colors that define Brindle Shih Tzus.

Brindle coats can include blacks, browns, tans, golds, and greys, which allows the different combinations that make each dog look unique.

In addition to the color diferences, the stripes of color aren’t always the same thickness. In order to identify a ‘pure’ Brindle coat, the dog should have all black points like with other coats.

Liver coloring admittedly sounds odd: what color is a liver, anyway? But this word does not actually refer to the coat. It refers to the color of a dog’s skin points.

A dog is classified as being liver colored when the lips, pads, nose, or eye rims are brown instead of black. These dogs lack black pigmentation and their coats can be any color.

For example, an all white Shih Tzu with a brown nose isn’t classified as white, it would be liver colored. But a white coat Shih Tzu with a black nose would be considered pure white. This logic also applies to dogs with Brindle coats.

Blue is another color type that sounds impossible. Naturally, it does not refer to the coat, as there are no naturally blue haired Shih Tzus.

Similar to the ‘color’ liver, blue Shih Tzus have blue noses and their coats can be many different colors. The coloring is difficult to identify unless it is being viewed in natural lighting.

Since the color is hard to observe, it’s easier to identify in person instead of online or through a picture.

What Genetics Lead to the Different Colors for Shih Tzus?

The pigment clumps in an irregular way and is distributed in a way that alters the physical attributes of these genes.

If a black gene being diluted, dogs get a blue nose, but when brown pigment is diluted, the result is a silvery color.

Despite the fact that the physical color mutation is silver, this mutation is officially called isabella, lavender or lilac. Breeders are more likely to refer to the color as lavender, but the AKC doesn’t list this color varriance as a standard at all.

This type of dilution only affects the dog’s skin points and not the actual coat color. The brown pigment that can cause the lilac coloring is recessive and also doesn’t affect the actual coat in any way, but it may cause the dog to have green eyes.

Brindle coats are caused by a complicated reaction to many genes found in different parts of the DNA.

Do Shih Tzu Puppies Change Color From Black To Brown, Or Black And White To Some Other Color?

Most Shih Tzu puppy coats change color from birth to be something completely different. The only coat that maintains its color is the black and white combination. Shih Tzus have two genes that can cause color changes from puppyhood to the first birthday.

The G gene causes the Shih Tzu’s coat to fade when it gets older, and it usually stops around the first birthday.

The ‘Chinchilla’ gene also changes the color, but the dog’s coat becomes silver over time. Not every puppy will have a color change, but most usually do.

Some Shih Tzu coats get darker while others get lighter, a few hairs in patches might change or a Brindle coat can fade away. Exposure to sun rays can also change a dog’s coat by ‘burning’ the fur and leaving it a reddish color.

It’s generally a good rule of thumb to not get stuck on the coat color of a Shih Tzu puppy, because the color will almost definitely change somewhere down the line.

Of course, this is not to say that a Shih Tzu puppy cannot keep its original fur color all the way to adulthood, but it is more likely to change than it is to remain the same.

There’s also no real way to tell if a Shih Tzu’s coat is definitely going to change until it actually happens. That being said, by the time your Shih Tzu is roughly one year old, you can safely assume that its coat is the color it is going to be for the rest of its life.