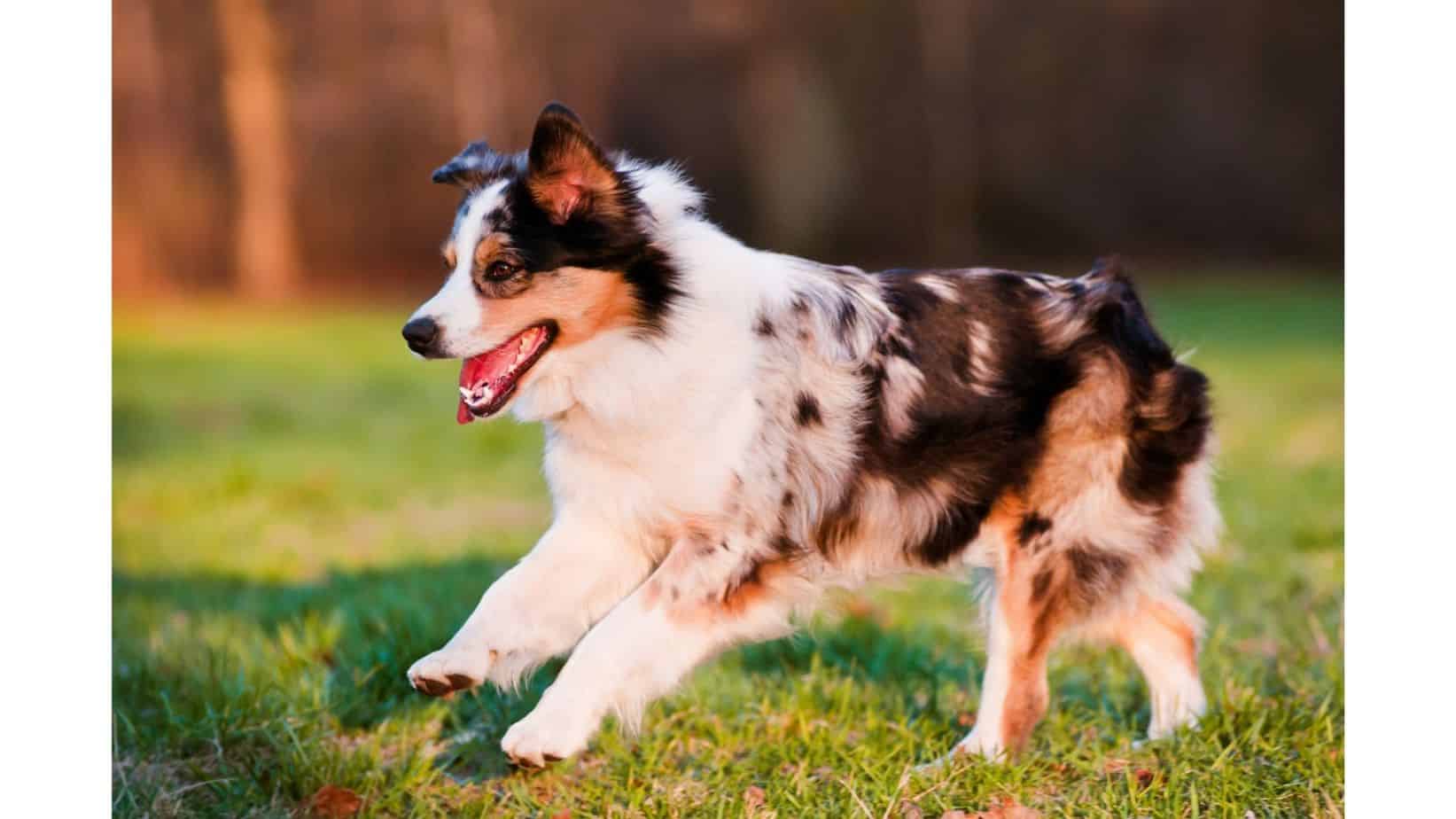 Australian shepherds, also known as “Aussies” are a gorgeous medium-sized dog breed, but don’t let their size fool you into thinking they’re easy to care for.

An Australian shepherd is a dog bred for herding cattle and they possess copious amounts of energy, endurance and intelligence. With time, patience and proper training, your Australian Shepherd can calm down.

Some of them settle down as they mature, usually around the time they turn two years old, but others often need a few more years behind them to finally grow into their energy and learn how to work with it.

Let’s take a look at some of the reasons why your Australian Shepherd is as hyper as he is and then figure out what you can do and what steps you can take to help calm him down.

Why Is My Australian Shepherd Hyper?

It can help to figure out exactly why your Australian shepherd is so antsy and wired and always moving around. Knowing why and understanding the reasons can help you decide how you want to tackle and subsequently resolve the issue.

Is this breed naturally hyperactive?

Ancestry: Australian shepherds are working dogs and as such, they need plenty of moving around, running, exercise and playtime to work off all that energy.

You have at home a dog that has, through the ages, been bred and raised to run circles around cattle and herd them-hundreds at a time—back into their shelter.

Now imagine how much of that energy, this need to be outdoors and in the open air, and that need for speed—for a lack of other words—run through his veins, passed on from his ancestors.

Nature: Sometimes, your Australian shepherd might just be high strung by nature, and there isn’t much you can do about it, except maybe giving him as much exercise as you can squeeze in and tire him out till he settles.

If you weren’t hoping he’d just calm down, you’d be wishing some of that energy rubbed off on you.

Is Your Aussie Bored, Under-Stimulated, And Under-Exercised?

A bored dog, especially one with an active, intelligent and curious mind like an Australian shepherd, will go looking for something to do, and probably get into mischief along the way in his excitement to explore, for example:

Bumping furniture and trinkets, digging through rabbit holes, “zoomies” through the house and other destructive behavior that manifests from this boredom.

They need social interaction to develop a healthy and well-adjusted personality. When they don’t receive enough of that, they act out, come seeking your attention and jump around, bark or howl to get it.

If he wears himself out before he comes inside your home, in an environment conducive to active play, fun and exercise, he is less likely to get razzled up.

Sometimes, your Australian shepherd might just be high-strung by nature. I don’t mean ‘high-spirited’ or ‘just being a big puppy.’

Have you heard of Hyperkinesis?

Hyperkinesis in dogs is often wrongly diagnosed as, or confused with just hyperactivity, poor training and too much energy. Not many pet owners can identify it in their dog, or know what it is.

Hyperkinesis is a behavioral condition, one that shows up through symptoms like aggression, agitation and a failure to “habituate to external stimuli.”

In essence, if your dog suffers from hyper-kineses, he will not listen to you, nor will he respond to training, be sensitive to loud noises, and might exhibit aggressive behavior.

If you believe your dog might be showing signs of suffering from this condition, then take him to a vet, one who can help give you an accurate and thorough diagnosis, and subsequent treatment for him.

He might prescribe medication, recommend some obedience training—probably under a trainer who is an expert working with dogs who have hyperkinesis—and provide you with a balanced diet chart for him, and an exercise schedule that might help him cope and calm down.

When Will Your Aussie, If Ever, Calm Down?

Most Australian Shepherds, most dogs for that matter, simmer down once they hit the two-year milestone.

By the time they turn two, most dogs are comfortably settled, either naturally with age or partly because they have been coaxed into a well-balanced and well-regulated routine that ensures that they aren’t too overzealous.

Again, that’s just most dogs and your particular dog isn’t a statistic. Your Australian shepherd probably has his own timeline on when he wants to grow up and parameters surrounding that.

A large part of how quickly he starts to mellow will have to do with his sire and mum and how they were growing up: genetics does impact your Aussie shepherd’s disposition.

Another thing that can help him, slowly nudge him to settle down faster is if, from as early an age as possible, you take a few steps and measures and speed things along.

How To Help Your Australian Shepherd Calm Down: 3 Great Ideas

I’ve mentioned several times in this article how training your dog can help regulate his behavior and help him settle down into a routine. It’s time I explained how.

Try to first understand what aspect of his behavior is too much to handle and what he needs to work on.

Barking, howling, growling: Remember that your response to your Aussie growling, howling or barking should not be to shout or growl back at him. That will only egg him on, aggravate him, or make him feel like you pose a threat to him.

Reinforce good behavior with treats, and when he behaves badly, let him know that it isn’t okay. Ignore him, don’t give in to the urge to react. Often, your dog gets vocal when he’s trying to get your attention.

Ignore him if he barks. Gradually he will quieten down and approach you in an acceptable and calm manner. Praise him, let him know he did a good job.

You don’t want him to stop barking altogether, only to do it when there’s a threat and he needs to alert you to it.

Additionally, train him to bark on command. It will be easier for you to teach him how to be quiet after you teach him when it is acceptable to bark or speak.

Jumping, running, pouncing: if your dog is refusing to sit down upon your command and is jumping all over you, hold out a treat, above his head level. He will look up and automatically, his rear will lower to the ground.

Only when he sits down and remains seated do you give him a treat. Slowly, he’ll know how to sit on command.

Running around the house is not permissible behavior and you can and must let your Australian shepherd know that! Focus training will help you train him to focus on your voice, command and even hand gestures. Eye contact is necessary to establish a connection.

Exercise is a part of training your dog to settle and simultaneously wear him out so he mellows down. Make sure you establish a routine for him to follow.

If he knows that he has a fixed schedule, one which gives him plenty of time to play, jump and run—preferably with other dogs—he is less likely to act out.

Social time: Consider enrolling your Aussie in a doggie playgroup. Not only will playing with other dogs wear him out, but he will also learn to behave well around other animals.

While this is not a quick-fix solution to his aggression, hyperactiveness, and behavioral problem, it might help your Australian Shepherd mellow down some when you have him castrated. By removing the glands that produce hormones and testosterone, you are removing two key ingredients that make him rambunctious.

A dog full of testosterone will be aggressive and hyper. A dog with a libido, too, will display overzealous and aggressive behaviour: humping and excessive drooling for example. So there is a good chance that he will calm down once you have him neutered.

As the proud and tired owner of an Australian Shepherd, you can expect at least two years of tumultuous, hyper behavior from your dog.

If you’re lucky and if you manage to train him properly from an early age, he will settle down much faster, but for some, it takes much longer to rid their system of all their excitement and curiosity for life and curl up happily with you on a couch.