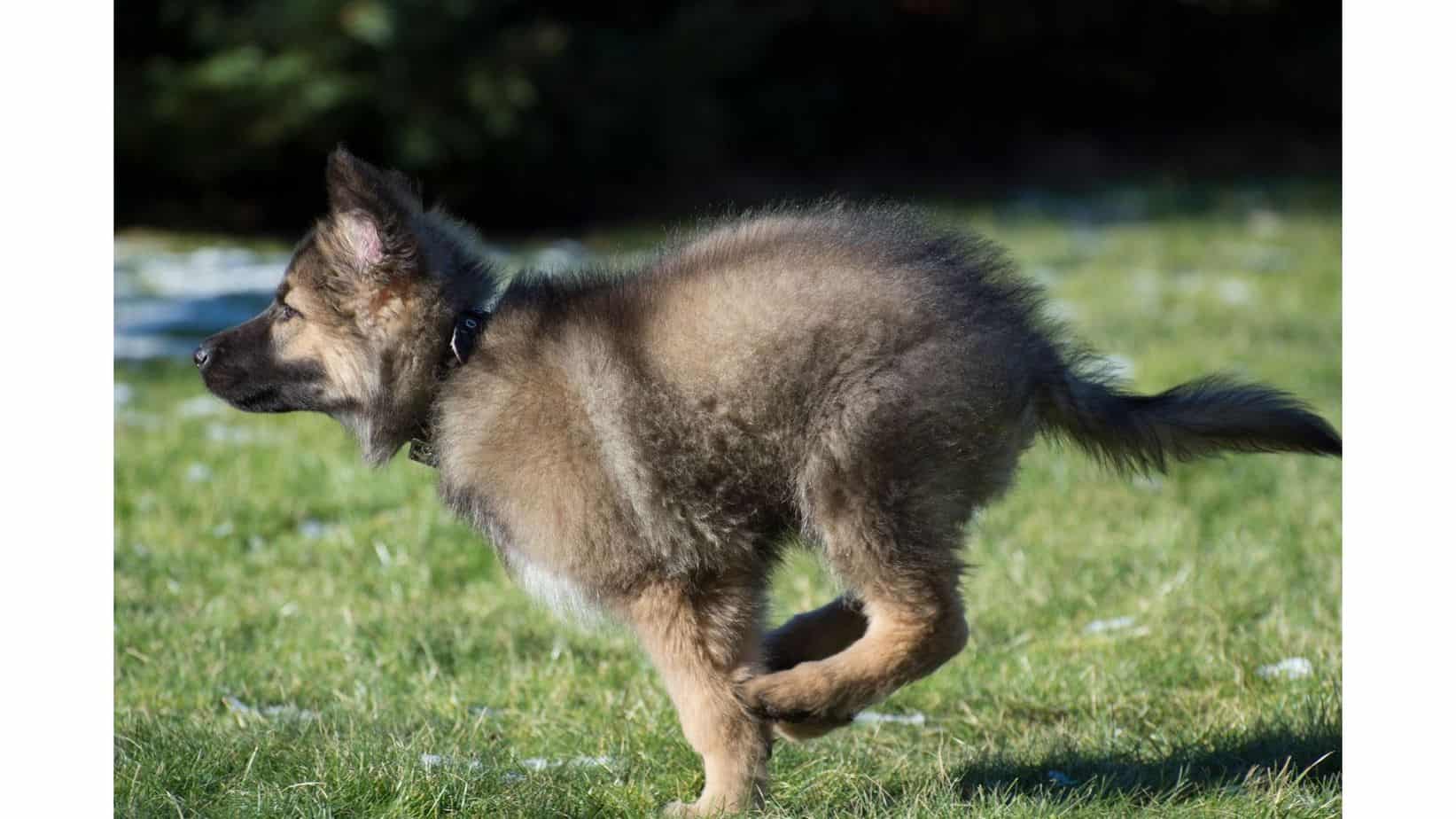 One of the most reliable and sturdy breeds of dogs, a German shepherd is the perfect choice for a pet and a guard dog. They can be the perfect companions for your children, full of energy and playfulness as a puppy, and protectiveness as they grow. Too full of it, perhaps.

German shepherds (or GSDs for short) will start to calm down when they are around 6 months old. By the time they hit the one year mark, and in the subsequent months, most German shepherds tend to settle down and become mature, solid, protective and dependable pets. With a proper outlet for their energy and good training, German shepherds can be calm and well-behaved pets.

This article will discuss how to identify the reasons for his hyper-activeness and what steps you can take to resolve it.

Why Is Your German Shepherd Hyper? 4 Main Reasons

German shepherds are predisposed to be an active, outdoorsy and energetic breed. You’ll find that they are often used as canine security, be it at home, or by law enforcement. They are strong, intelligent and full of unbridled energy.

This combination can also mean that they’re hyperactive. A German shepherd puppy will be curious and find mischief where mischief is to be found.

He will bite, chew and eat everything he can get his paws on and teeth through. That is his nature and even with training, he might not fully shed that tendency. His coat on the other hand, he will shed all day, every day.

Most of them however, do mature and calm down around the time they turn one, which means they won’t stay hyper. You can ensure that they calm down by exercising and training them.

Genetic predisposition: It is ingrained in them, ingrained in the genetic code passed on from their ancestors who were herders, hunters and guard dogs, to protect and take care of their pack–you and your family in this case. Your German shepherd is the product of his kind.

Instincts and caution: His protective instincts—like running around you in circles when you’re walking, not letting you go to even the bathroom alone , jumping in front of you or constantly dragging you by the leash to sniff after some scent he caught—are all his way of assessing possible threats.

Some of it is just him being a big puppy, but most of it is his instincts flaring up mixed with caution.

While it may come across as him just being hyperactive, there is a good chance that your German shepherd is trying to do what his ancestors did: track, hunt and if you’re with him, protect.

This is what makes him a great guard dog, as long as his instincts and energy are honed by training to become a skill and not end up being a nuisance. They are sociable as well, which makes them wonderful friends and champions for your children.

3. Is Your German Shepherd Puppy Being Aggressive, or Just Assertive?

Again, what you think of as aggression: excessive chewing, eating your socks, barking boisterously and bounding about in an over-enthusiastic manner, is part adolescent pent-up energy and hormones—yes, even dogs can act out—and part him trying to be a good guard dog to you.

He might growl at some strangers and bark at the pigeons, but he will be fiercely loyal to you and your children.

4. Your German Shepherd is bored and wants attention

I can’t stress how important it is for your German shepherd to get enough exercise and playtime to wear him out. If he’s left to his own devices, with no one to play with, he will get bored, and a bored dog, especially an untrained and young one, will act out, and seek attention.

How? The usual way—barking, whining, zoomies, prancing, jumping and in general, being hyper-active albeit in different ways.

When and How Will German Shepherds Calm Down?

I hate to be the one to tell you this, but all dogs chew, bite, scratch and then eat up what they bite, chew and scratch. It’s a rite of passage that they never truly grow out of.

Why is he chewing or biting so much?

You’ll notice that the chewing, biting and nipping will be  particularly bad when they are younger. Sure, your German shepherd might just be an active pup, but a dog actually starts teething when he is three to four weeks old, and by the six to eight week stage, all his deciduous teeth (baby teeth) will have erupted. His adult teeth usually come in when he is 6 months old.

Teething, and the consequent chewing and biting, will and should stop around that 6 month point when all his baby teeth fall out and adult teeth set in.

Teething can be uncomfortable and painful for your German shepherd, and equally hard on your toes, socks and furniture if he decides to chew on them. But it won’t last forever and there are things you can do to help your dog and your pretty rugs.

What you can do is give them alternatives to bite, chew and rip. Consider investing in some chewable toys (like this one for aggressive chewers), rawhide bones and a scratch post or board. Also buy some interactive toys to keep them occupied and away from your socks, shoes and furniture.

In addition, frozen treats will not just keep him occupied, it will also cool down and soothe his gums.

This, too, is characteristic of German shepherds who love nothing more than to howl at the moon if you let them; so the point is to not let them all the time. If you think you have it bad with a GSD, a husky will be a shock to your system.

A GSD puppy, especially under six months, who is just finding his voice will whine and yowl more than a dog who is a year or older. They should calm down a little at this age, especially since they can be trained not to as they mature.

You don’t want them to stop barking or growling altogether, just not all the time inside your house.

You want them to alert you to an approaching intruder, or to growl at someone who comes off as a threat to either of you. These vocal warnings are often enough to turn away most threats.

The only way to get them to stop annoying the neighbors by barking at passing cars, cats and birds, and to instead bark only when necessary is to train them, starting early and doing it systematically.

Running or jumping all over the house: When you give your German shepherd the playtime and exercise he needs, he will not be so active and hyper all the time. He will never be a couch potato, as it’s against his nature, but you can tire him out.

This way, when he is at home, he’ll be more subdued and not knock over your favorite vase or keep bumping into you all the time.

All of the above are signs of an active and hyper dog. Some of them outgrow it at the one year mark and some take longer and require more training, exercise and attention than others. But in the end, you can calm your German shepherd down.

What can you do?

I’ve mentioned the importance of training your German shepherd and the role it plays in making him well behaved and mild-mannered, as opposed to aggressive, hyperactive and noisy. So here are the basics of how you go about it.

Noise training: Reacting to your dog barking at something by yelling or shouting in return will only aggravate them, or make them think that you’re scared and that there really is a threat. First, stay calm.

Bark on command: Teach your German shepherd how to bark on command! Oddly enough, this has proved to be an effective way to teach your dog how to be quiet after he’s learned when to bark.

Get your dog excited, a definite way to get him to bark. The minute he does, mark the bark. Mark the bark with a command like ‘speak’ or just ‘bark’ and then reward them with a treat. Remember to praise them.

You, in return, must learn to recognize his concern and act accordingly. Give him a treat and praise him when he alerts you to real threats. Soon, you and your dog will be in tune with each other and he will alert you to trouble by barking at the right time.

Give Your German Shepherd A Proper Diet

Every breed requires a different kind of diet, suited to their age, activity level and their dietary requirements. A vet can chart up a good diet plan for you to follow if you are so inclined.

A balanced diet will give him just the right amount of energy he needs–no more and no less.

Make sure your German shepherd gets enough protein to build his muscles and keep up his energy. But too much protein in his diet will not only make him excessively energetic, but it will also affect his kidneys.

The same goes for his sugar and carb intake. Don’t overdo it when it comes to giving him treats, no matter how big his puppy dog eyes are.

Will Neutering Your GSD Help Calm Him Down?

When you castrate your dog, you are effectively removing the glands that provide their system with hormones. These glands are responsible for the amount of testosterone and other hormones that make him overly hyper, rouse his libido and have him acting out aggressively,

So, while neutering or spaying your German shepherd does help regulate his hormones–completely remove them, rather–and that in turn subdues them to an extent, he can continue to be an energetic dog if he is so inclined. It is not a quick-fix solution to hyperactiveness.

A combination of good training, a balanced diet, plenty of exercises and yes, even neutering, is necessary to effectively calm your German Shepherd down. When that will happen varies from dog to dog, but in the end, a healthy, happy and well-trained dog should and will calm down and be well behaved.