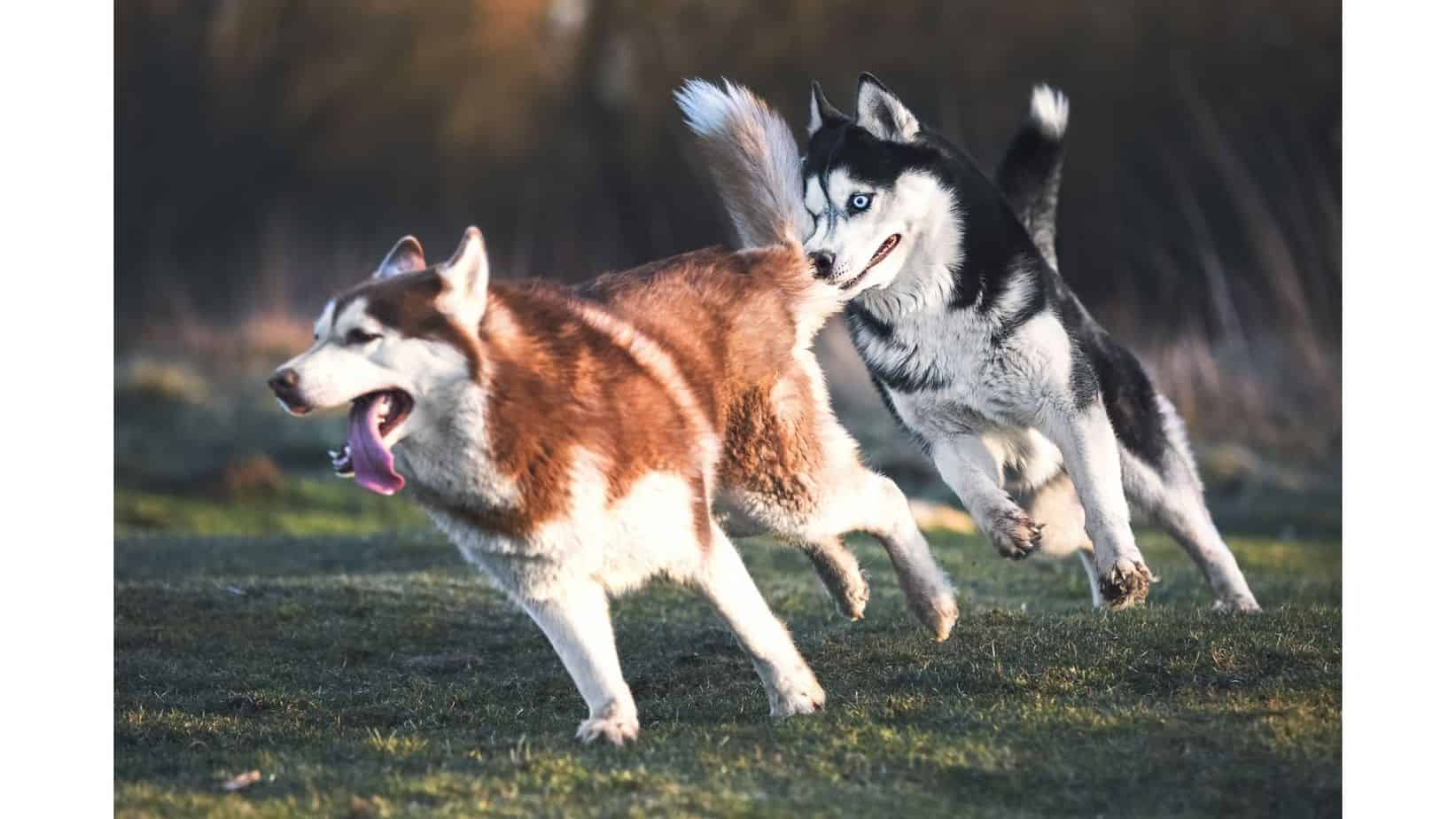 You did it. You gave in to your child’s pleading eyes–or even your own– and got a puppy, and a Husky puppy at that. Didn’t think such a small bundle of fur could move around so much and be so fast, did you?

Huskies are an active breed, and all that energy they have as a puppy never fully wears off when they grow up. But they should calm down relatively, when they hit the 2 or 3-year mark, and make their way into adulthood. Playtime, plenty of exercise and even proper training during his primary years go a long way to help your Husky settle.

But he might still be too hyper-active for you and your household.

This article gives you an idea of what to expect from your energetic Husky and why he is so hyper: What you can do, what steps and measures do you take, to help speed up the process of getting him to calm down?

Why Is My Husky So Hyper? Three Key Reasons

Separation anxiety in dogs, especially for such a sociable and friendly breed like the Husky, is very much real. This anxiety can manifest in different ways, one of them being excessive activity, destructive behaviour and hyper-energy.

They will chew and eat anything and everything they get their paws on, and a case of the “zoomies” can have them wreaking havoc in your home.

Huskies, especially puppies, need a lot of attention, and when they don’t get it, they will let you know, loud and clear—loud being the operative word.

It might seem like you’re spending half your day dealing with them and realizing that you’re no match for their energy levels.

3. Nature vs Nurture : Are Huskies Predisposed To Be Hyper?

Huskies are a breed historically known to pull fully loaded sledges across the snow for hours without tiring. They are strong swimmers and not only does physical exercise not easily wear them down, but they also build up their energy levels pretty quick. They are genetically predisposed to have high energy levels.

Add that to their mile-wide streak of playful sass and their active minds and you’ll have a very energetic and hyper dog at home.

Some huskies, however, are just plain old hyper and there’s nothing you can do about it except train them and wear them out with exercise. You can expect a reprieve when they turn one or a little older as they should naturally, as well with proper training, calm down.

Will My Husky Ever Calm Down? When?

Puppies of all breeds are relatively more hyperactive than their adult counterparts. You Husky too will probably be a little bundle of terror growing up. If there is mischief to find, he will find it.

When he hits the 12 to 15 months mark, your Husky should show signs of settling down a little.

But that being said, every husky is different, and as such, have different parameters. It might be hard to pin down exactly when he starts to calm down.

If your cute little Husky is biting and chewing a lot, you’ll notice that it is usually when he is around 2-3 months old, and is an unfortunate side-effect of teething. This should settle down when his adult teeth come in when he turns 6 months.

Until then, chewable toys, rawhide bones and frozen treats, or frozen veggies and fruits, are your best friends and your socks’ and shoes’ saviors.

So even though he will be relatively calmer after the age of two, it will probably not be as calm and behaved as you’d want him to.

That being said, there are things you can do, steps and measures you can take to nudge, drag and pull your Husky to calm down and settle in.

3 Great Ways To Calm Down A Rowdy Husky

1. Feed Your Husky A Husky-Appropriate Diet

Remember that huskies have a pretty high metabolism and are used to functioning on small amounts of food. They store energy and when that store is depleted, it doesn’t take much to build it back up.

Keep this in mind when you’re formulating a diet plan.

Protein in his diet: Protein levels in your Husky’s food are something you have to moderate.

A good amount of protein is vital to his diet and will supply his system with amino acids that help build his muscles-tone, tendons, nails and skin. Too much protein and your dog’s kidneys can get affected, making him sick.

Too much protein is not good for any dog. For a Husky? You might just as well have given him caffeine!

Consult a vet and help formulate a balanced diet plan. Find out how often your Husky should be fed, and what treats are acceptable.

Limit the treats: Would you give candy to a child before bedtime? No, and the same rule applies to your husky.

He definitely deserves treats but do not let him con you into giving him too many. He will just end up being hyper, or feel sick. Don’t let him trick you into over-feeding him.

Understanding that a Husky needs a lot of exercise every day is very important, especially when you’re considering adopting this breed.

This means frequent walks, trips to the park, playing fetch and even swimming with them to burn off all that excess energy.

If your Husky gets enough exercise and playtime, he will not act out and be hyper, first because his need for exercise and attention have been met and also because hopefully, at the end of it, he’ll be too tired to do much but curl up with you on the couch while you both catch your breath and relax.

Playgroups: What you can do is consider enrolling him—and yourself—in playgroups. You don’t have to be the one running and playing with him to exhaust him and exhaust yourself in the process. There are other people out there who have hyper, energetic dogs. Let the dogs tire each other out.

Interacting with other dogs will also help your Husky’s social development and behavior, and work to calm him down, especially if he gets too nervous or hyper around other dogs and people.

Playgroups are a great—and supervised—environment to effectively introduce him to his peers. He can make friends and so can you.

Maybe they have a playgroup where dogs and children can play together and work off both their excess energy!

It is important to train your Husky to behave, starting as early as possible when he is a puppy. By training, I don’t mean the usual sit-down-shake paw triage of commands, but a rather more thorough and targeted approach to obedience training: how to behave when he is alone, during walks, around children.

Training him allows you to lay down ground rules for him to follow all through his life. A trained Husky puppy is a well-behaved one and will be less prone to bouts of mischief, hyperactiveness and boredom.

Here are some training methods you can try.

Wait for a minute and then check to see if he has calmed down before walking in. If he gets hyper all over again, walk out again and repeat this step till he finally settles down.

Command him to sit and only when he has and remains so, should you leash him, letting him know that he can only go out for a walk when he waits and sits for you to leash him.

2. Huskies around other animals: There could be something about the other dog or animal that is setting your Husky off. It might be excitement that he feels, but it can also be anxiety.

First, you’ll need to identify what triggers your Husky, before you can effectively train him to react appropriately.

3. Focus training: Focus training can help get your husky behaving. Train your husky to focus on you, not the other animal or human. Train him to recognize different hand gestures as commands. Eye contact is vital during focus training.

When your dog has finally settled down, give him a treat to reward him and to reinforce his calm behavior.

4. Distract and desensitize: Once you reach a point where your dog can focus on command, introduce distraction like squeaky, chew toys, bones or treats and repeat the training till he knows to focus on you and not the distraction in place.

Most dogs raised with other pets will already be desensitized to other animals, and training them should be easier.

5. Heed commands: It is natural for him to be curious, but you must teach your Husky to recognize and heed commands from you, to calm down when you issue a command.

You don’t want to leech all fun and quirkiness from your Husky, just channel it to let him know that he can let loose and have fun, but there is an appropriate time for it: during play and exercise time.

6. Routine: Have a routine, one that will help him settle into it. If he knows that he has an allotted time to play, have fun and run around, he will look forward to it, but not misbehave the rest of the time.

Can Neutering Your Husky Help With Energy Levels?

A very common question that most husky owners have is whether their Husky will calm down once you take him to a vet and have him neutered. The answer isn’t all that straightforward.

When you neuter a dog, there will be a change in his hormones and testosterone levels. Some people do find that their Husky is calmer because of it.

Dogs in general will be less aggressive and more subdued when their testosterone levels drop, and this applies to your Husky as well.

But, that being said, your Husk might just be a rambunctious dog with too much energy than you’d like. That has more to do with his personality than with his hormones.

Neutering him isn’t a quick-fix solution to behavioral issues; it’s more to do with his fertility and hormones.

With proper training, a balanced, appropriately portioned diet, lots of exercise to wear him out and a liberal reserve of patience on your end, your Husky should and will calm down. Fingers, toes and paws crossed!