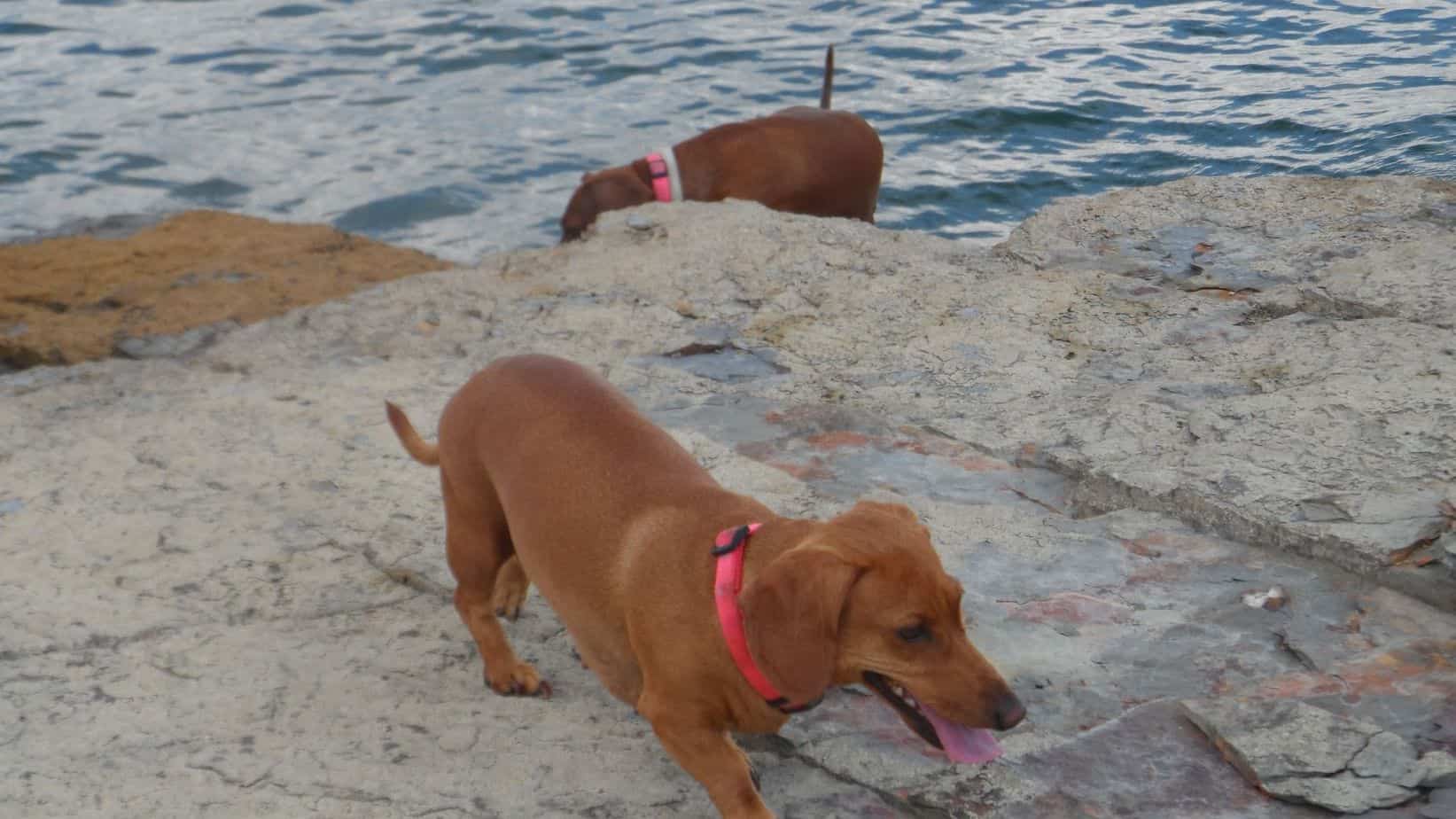 The sausage dog shape is instantly recognizable in one of the world’s most popular breeds, the Dachshund. Although breeders have exaggerated the low and long characteristics over time, the Dachshund’s spine appears much longer due to their shortened limbs.

Dachshunds have long bodies due to chondrodysplasia, a genetic mutation that causes a form of dwarfism that results in shortened limbs. However, the Dachshund’s spine has an identical number of vertebrae as standard dog breeds. Historically, the shorter limbs allowed for more digging power while keeping the back legs on solid ground outside badger holes.

Because their front and hind limbs are shortened, the spine appears longer and gives Dachshunds their characteristic sausage shape.

Early Dachshund breeders took advantage of the unique shortened limbs to create a brave and tenacious hunting hound close to the ground for scent and low to fit down burrows for prey.

Why Do Dachshunds Have Short Legs?

Heidi Parker, a geneticist at the National Human Genome Research Institute, identified a single evolutionary event based on modern short-legged dogs such as Dachshunds. Parker and her peers traced back the extra gene introduced into dog genetics about 300 years ago.

One puppy in our modern short-legged breeds had an extra, abnormal copy of a gene responsible for coding the growth-promoting protein called Fibroblast Growth Factor 4 (FGF4.) This retrogene is responsible for the long bone formation of limbs due to calcification of the growth plates resulting in short curved legs.

The duplicate gene copy causes these breeds to overproduce FRFR3, which is the same protein responsible for achondroplasia, a condition that results in dwarfism in human beings.

In dogs, this condition is called chondrodysplasia or disproportionate dwarfism and is found in more than a dozen modern dog breeds, including the Corgi, Basset, Pekinese, and Dachshund.

Why Do Dachshunds Have Long Bodies?

Although selective breeding has enhanced the elongation of the Dachshund’s spine, the Dachshund breed suffers from chondrodysplasia or disproportionate dwarfism, making the body appear longer with shortened limbs.

A single evolutionary event created the chondrodysplasia gene, which became incorporated into evolving domesticated breeds for hunting purposes. The Dachshund’s shortened build allowed them to excel in tracking scents and to pursue prey such as Badgers and later rabbits and rats, down their tunnels.

When badgers were no longer so prolific in Dachshund’s native Germany, the miniature Dachshund was created by selective breeding to hunt the proliferation of rabbits and rats.

The Dachshund has large spade-like paws that make them excellent diggers and large ears to protect their ear canals from dirt and debris when burrowing.

I’ve written more in this article here about the Dachshund’s digging tendencies if you want to check that out!

Aren’t Dachshunds Supposed to be Long and Low?

Although the long and low’ has long been part of the Dachshund breeding standard, the breeding of exaggerated physical features has long been out of vogue. Exaggerated features resulted from breeders conforming to pedigree breed standards and their narrow guidelines without consideration of the health implications for the breed.

‘Longer and lower’ breeding of Dachshunds has been linked to an increased likelihood of developing intervertebral Disc Disease ( IVDD). Rowena Packer published a Royal Veterinary College (RVC) paper demonstrating the potential health hazards of enhancing the long and low breed characteristic in 2013.

Many experts have urged that the excessive length and lack of ground clearance cannot be considered to fulfill the ‘fit for function’ criteria. In 2018, the Breed Council Health Committee urged kennel club associations to ensure that breed exaggerations of low clearance and elongated spines are not allowed in the showing circles.

This endeavor is part of the Breed Health and Conservation Plan (BHCP) to ensure that unhealthy breed exaggeration is eliminated from Kennel Clubs’ showing arenas. Long and low breed exaggerations affect natural movement and focus on appearance rather than the features required for the Dachshund breed’s good health.

Why Do Dachshunds Suffer From Back Problems?

Dachshunds have the same number of vertebrae as other dogs. However, they have an increased hereditary likelihood of 25% (1 in 4) of developing IVDD.

Intervertebral discs are fibrous sacs between the vertebrae that are filled with a jelly-like material. These act as shock absorbers in a dog’s spine and protect the spine from jarring injuries.

Degeneration of these sacs is a normal aging process in dogs, but in the Dachshund, this degeneration occurs much earlier, as young as 12-18 months. As the discs degenerate, they lose water, become fibrous, and are often mineralized, which can cause pain, partial loss of limb function or paralysis in Dachshunds.

However, the latest studies have shown that HCP or hypochondroplasia is not entirely responsible for the Type 1 IVDD, as other breeds are susceptible to the ailment without chondrodysplasia.

The strong role of familial heritability in certain HCP and the likelihood of IVDD-1 is good news for the dachshund breed. Once all the genetics responsible for the IVDD susceptibility are isolated, breeders may remove them from the breed without affecting the unique build of the Dachshund.

Can We Prevent Back Problems In Dachshunds?

Because of their unique body structure, particular care should be taken when breeding, selecting, and owning a Dachshund. Although Dachshund owners have long associated back disease with the proportionately longer spine’s improper care, new evidence has shown that more active Dachshunds are less prone to IVDD.

A study showed that Dachshunds with more than an hour of exercise a day and moderate to high activity had less prevalence of IVDD than Dachshunds who were prevented from jumping on and off furniture. So the old adages of preventing impact and jumping in Dachshunds may even have a negative effect, which I’ve also written more about in this article.

There are three main areas where Dachshunds may better their chances of a long and pain-free life, and these exist on three levels:

Excessive focus on narrow breed standards at the expense of Dachshunds health has a lot to do with the beloved Doxie’s increased chance of back disease.

With increased scientific interest and studies, the challenges of IVDD in Dachshunds are coming to be seen as something that may be eliminated from the breed without sacrificing their unique conformation.

Increased breed awareness and changes in the competitive showing arenas will go a long way to increasing this tenacious little breed’s health. Prospective owners should ensure that their Doxie does not suffer from breed exaggerations and allow them to cause their characteristic mischief, free from pain.