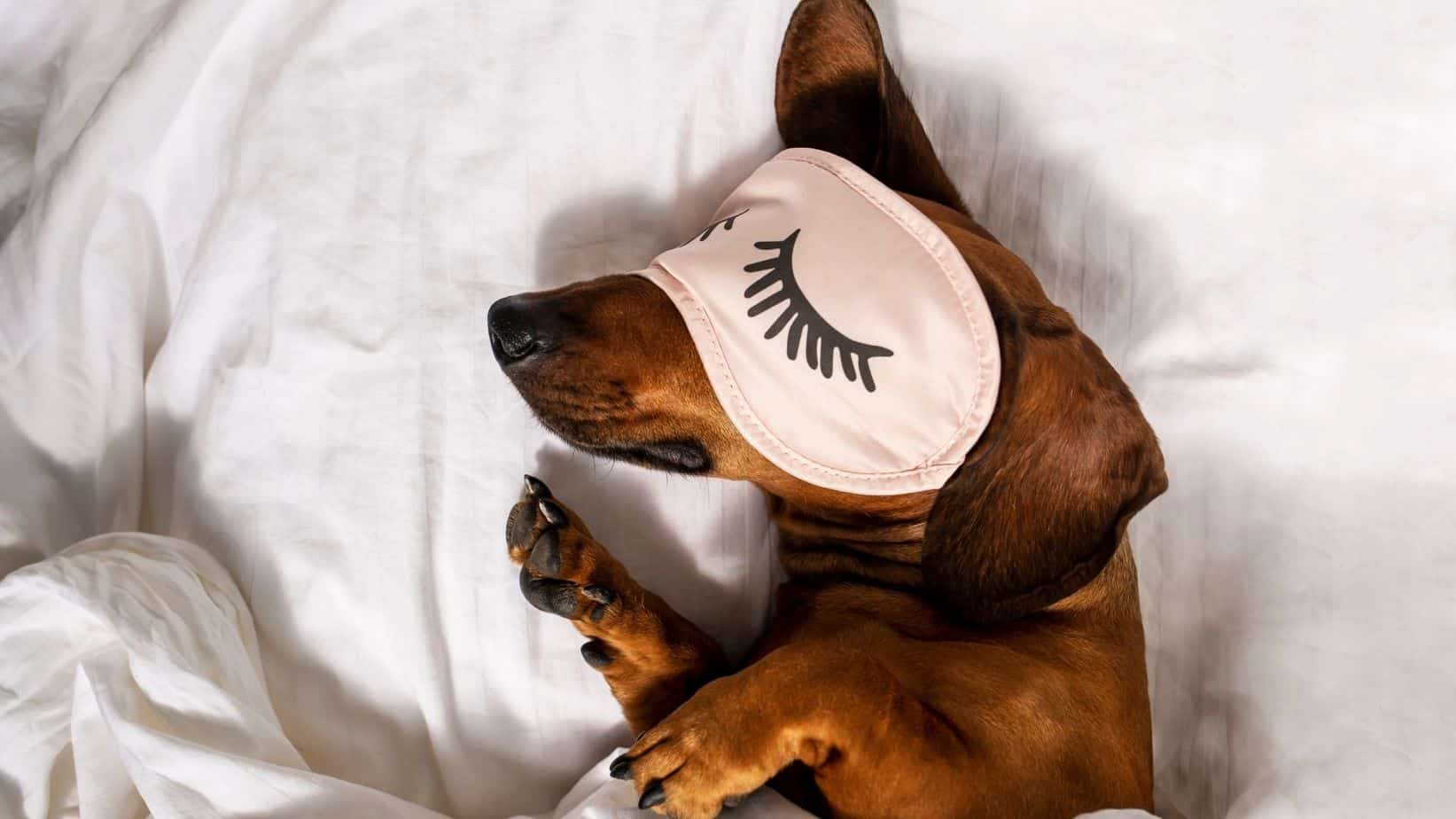 Your Dachshund was bred to be a brave little hunter, flushing out fearsome badgers from their burrows. Even though these days they might only be hunting for sleep on your couch or bed, they still retain their hunting genes. Hunting dogs are bred to engage in bursts of hunting activity followed by rest periods, much like their wild cousins do to this day.

Dachshunds sleep so much because it is in their hunting breed genetics, not due to laziness. An average Dachshund will spend between 9-14 hours a day sleeping while seniors will sleep 12-18 hours a day. Dachshund puppies need much more sleep and will spend an average of 20 hours in dreamland.

If your Dachshund spends most of the day flipped over belly up (if it’s hot) or curled under your blankets (when it is cold), it is an entirely normal practice.

Why Do Dachshunds Need So Much Sleep?

According to estimates, dogs tend to spend 50% of their day sleeping and 30 percent inactively awake, and your Dachshund is no different.

This sleep ratio is more pronounced in the hunting breeds who needed to conserve energy for the exhausting work of tracking, chasing, and hunting prey.

Dachshunds join many of their hound cousins on the list of the sleepiest breeds, such as Bassets Greyhounds and Bloodhounds.

Domestic dogs also have fewer stressors in their environments compared to their wild ancestors and generally tend to sleep more because most of their needs are met by loving owners.

Dogs (including Dachshunds) only spend around ten percent of their sleep in the REM state because they maintain a level of alertness that allows them to wake quickly in response to sounds or movement. As a result, dogs require more total sleep than humans to compensate for the lost REM time.

Your Dachshunds sleeping patterns may also be a reflection of their levels of activity and stimulation as a bored, unexercised pet will often exhibit lethargy due to boredom.

Owners should ensure that they provide stimulation in terms of walks and play every day to ensure their Dachshunds can exercise their bodies and highly intelligent brains.

Why Do Dachshunds Sleep on Their Backs?

If your Dachshund loves to lie with his belly up, it is generally a sign that they feel relaxed and secure in their environment. Back lying behaviors aren’t commonly seen in the wild dog as the position exposes their vulnerable bellies to potential danger.

Another reason why your Dachshund sleeps on their back is a cooling tactic when your pooch feels too hot. Unlike humans, dogs only have few sweat glands on their paw pads and noses and can’t regulate their temperature by sweating alone.

By exposing their paws and the less densely furred tummy, your Dachshund is taking advantage of vasodilation to bring the warm blood to the skin’s surface for cooling.

This sleeping position also is the best reflection of your Dachshund’s trust and relaxed contentment in their environment. The position also allows your sausage dog to stretch out their spine comfortably.

How Much Sleep Do Dachshunds Need at Each Stage in Life?

Your adult Dachshund will need to sleep between 9-14 hours a day to get proper rest, and these hours are divided up between naps and nighttime sleeping hours.

This percentage is a general estimate and can be influenced by several factors such as age, health levels, and activity levels.

Senior Dachshunds (10 to 13 years) require more sleep than adult Dachshunds as their body slows down and moving requires more energy.

Your senior pet may need more frequent toilet breaks as well, which may disturb their sleep. Neurodegeneration may also cause your pooch to spend more extended periods asleep.

Dachshund Puppies have specialized sleep requirements and will spend between 18 and 20 hours a day in sleep.

Sleep plays a vital role in your puppy’s healthy growth and allows the development of their brains, immune systems, central nervous systems, and muscles. Puppyhood is the time of growth spurts, and your Dachshund puppy will need plenty of rest to develop his body.

How to help your Dachshund Puppy Sleep Through the Night: 3 Suggestions

As well as being the cutest little creature on earth, your Dachshund puppy will most probably steal away your sleep initially until you have established a sleep routine.

Dachshund Puppies exhibit anxiety about being separated from their mother and siblings, much like a human child would, and establishing a sleep routine requires gentle patience and understanding.

There are a couple of things that might help your puppy sleep at night. To ensure your puppy is happy and secure ( and save yourself from sleep deprivation!)

Burning off the excess puppy energy is a great trick to getting your Dachshund puppy to sleep at night.

Providing walks, play, and toys before bedtime can provide the stimulation necessary for a good night of sleep. If you pay particular attention to your puppy’s activity levels before sleep, you help synchronize their sleep patterns to suit yours better.

If you’re interested in reading more about going running with Dachshunds and when to start exercising them as puppies, read my article here to learn more!

There are two schools of thought regarding a Dachshund puppy’s early days in a new home. Puppies crave contact and closeness more than anything in the early days when they are separated from their pack and suffer anxiety.

Some believe that the puppy should have contact with their human and take the puppy into their beds, while others prefer the crate system.

If you do not intend to let your Dachshund sleep on your bed, then the crate is a better option, but you will need a heart of steel to hear the whimpers and cries for the initial transition period without rushing to their aid at every little sound they make.

If you don’t intend your Dachshund to share your bed as an adult, you should use a crate.

Crates can provide a secure and safe sleeping space that your puppy will become accustomed to at sleep time and may aid housebreaking as puppies generally avoid fouling their sleeping area.

Your puppy will often wake at night if they need to go to the bathroom. Owners can lessen the likelihood of toilet interruptions by feeding their puppies two to three hours before bed instead of directly before sleep.

You should always take your puppy on a toilet break just before sleep and first thing when they wake up to avoid little accidents in your home. By voiding its bladder and bowels before bed, your puppy will have more chance of uninterrupted sleep.

Will Allowing My Dachshund Under the Covers Help Them Sleep?

Dachshunds are notorious duvet burrowers, and they will happily turn your bed into a burrow where they can hunt sleep instead of hunting badgers. The tunneling and digging instinct of a Dachshund is part of genetic makeup, and my Dachshund is an excellent bed warmer in the winter months.

Some naysayers have suggested that your dog may suffer from oxygen deprivation under the covers, but that is not necessarily true. Your Dachshund will frequently emerge from their warm burrow for some fresh air before returning to their favorite spots, so owners need not worry about the health factor.

If you prefer a dog-free bed, you can provide your dog with a warm blanket of their own to snuggle into at night for comfort and feelings of security. Otherwise, you can encourage your pet to sleep on top of the covers by providing their own blanket on top of your bed for their personal use.

Dachshunds love to sleep and make great sleeping companions, albeit slightly blanket and pillow hungry bedfellows. My Dachshund Emily is as much part of my sleeping ritual as my pillows and duvet, and I couldn’t imagine her anywhere else at night when it’s time to cuddle.

That being said, your Dachshund will quickly get used to their own sleeping space if you provide a warm and snug environment.