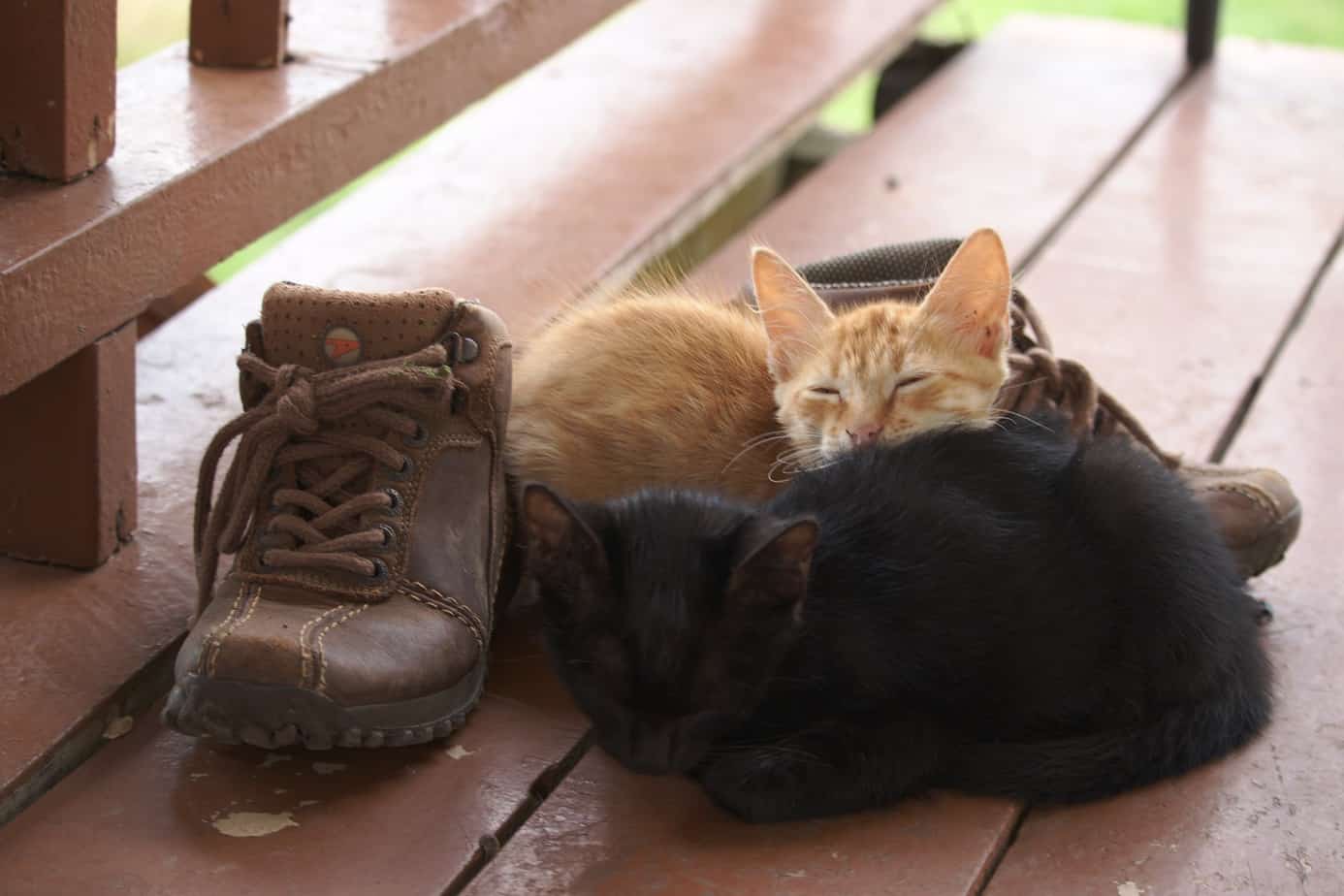 Today I was watching our cat rub her face against a pair of my shoes on the ground in the living room, as she often does when we get home from work, and I couldn’t help but wonder why our cat rubs her face on different pairs of shoes?

Rather than just chalking it up to our cat being weird, which is already quite true, I did some research to see why she and other cats do this behavior.

Cats like to massage their faces on our shoes because we carry in scents from the outside and possibly other animals.  By massaging their face on the shoe, they are releasing pheromones, or their own unique scent, much like our deodorant or favorite perfume or cologne. This may be her way of marking her territory so that we go out into the world, other animals can “see” her own trademark scent.

When our cats decide to rub, wrestle, and play “kickaroo” with our shoes they are also signaling to us that they feel safe.  They enjoy our scent and find it comforting.

Much like humans are into brand names, animals have their own kind of brand recognition.  They also want to show the world that they possess their own space on this planet.

How Cats See Their World

Pheromones are defined by the Oxford English dictionary as “A chemical substance produced and released into the environment by an animal, especially a mammal or an insect, affecting the behaviour or physiology of others of its species.”

Humans release as well as pick up on pheromones, but why are they such a big deal to cats and other pets?

Cats can detect many more scents than humans can.  Their sense of smell is fourteen times stronger than our own.

When broken down on a chemical level: cats have 30 of a special type of receptor protein, known as “v1r”,  in their nose, which they use to distinguish between scents.

In fact, this is over three times as many as the nine v1r proteins dogs possess and 30 times as many as humans. This would explain why a shoe or any of our clothing items can be so intriguing. Our cats can give us even a stronger play by play of what we were doing, where we were walking, and what we stepped in throughout the day.

Should I Stop My Cat From Rubbing My Shoes?

Generally it’s harmless to you and your pet if he or she does this face rubbing routine on your shoes or flip flops, and may even help your cat feel closer to you because of the stronger scent your feet give off versus clean clothes and skin.

The downside would be if you’re allergic to this particular cat, as they do tend to leave plenty of their fur on the shoes in this situation.

If you have to pick up your shoes to put them away and then touch your face, especially your eyes or nose, you would be putting yourself at greater risk for runny nose and itchy eyes due to allergies.

Here are a few ideas to prevent your allergies from being triggered by cat fur and dander on your shoes:

Unless your cat decides to vomit on your shoes after they release their pheromones on them, cleaning up should be relatively easy.  For leather shoes, I recommend using a mild cleansing cloth like baby wipes.  This should remove any hair and saliva they happen to deposit.

For rubber flip flops, simply rinse them off with a garden hose. Chances if you have been wearing them outside, they have accumulated other dirt anyway.  Cloth shoes such as TOMS can be washed in the washing machine with a mild detergent like Tide Free and Gentle. Make sure to let them air dry.

On another note, if you really care about your footwear, I would suggest not leaving them out, as cats and dogs sometimes like to chew on them.  I have had an expensive pair of shoes damaged this way.

Taking the extra step (pun intended) to put your shoes away where your feline friend cannot reach them is the most effective method in preventing any permanent damage to your shoes.